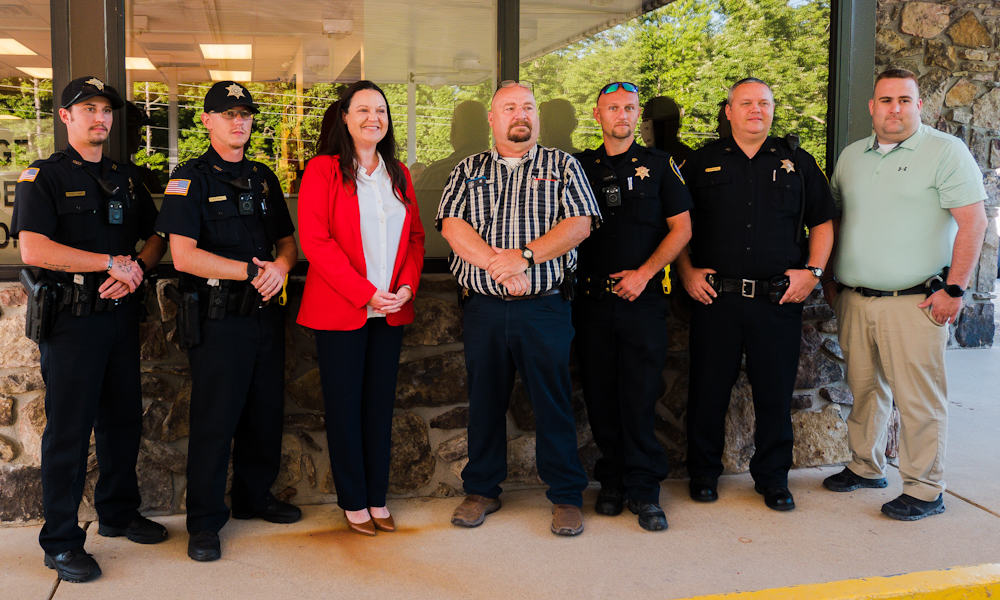 Newly installed Hot Springs Village Police Chief, Kristi Bennett, held her first Coffee with the Chief Meeting on July 12, 2022, at 8:00 AM at the Police Academy Training Center. The new Police Chief prefers to be called, “Kristi”.

Kristi said she is a native of Jessieville, Arkansas. Her mother was an interior designer, working for Cooper Homes in the early 90s. Kristi said she went to work with her mother when she was little. She attended Henderson University before she went to work for the Texarkana Police Department for the next 20 years, but she always felt like she was being pulled back to this area.

She has spent a lot of time with the officers over the last couple of months, but Monday, July 11 was her first official day in her new position as chief.

Kristi said that the HSV police force loves the community and they love helping people. “I just cannot be more blessed to have a more professional and more qualified team with me,” expressed Kristi.

The new Chief said she is big on “Progressive Community Oriented Policing,” as are her officers. Times are different than they used to be. There is so much negativity around policing and a lot of agencies have had to adjust by buying cameras and using social media. “The media has put such a negative light on law enforcement,” said Kristi.

“Don’t get me wrong. There are bad cops out there. I am not going to sit here and say we are all perfect, and beautiful and we never make mistakes,” continued the Chief. “Some mistakes are so terrible, that it gives us all a bad name. Because of this negativity, we’re having to adjust. We have had to step back and reflect on how we can be more community-oriented to get more community on our side. I don’t see that as a problem here.”

Another guest said that there is tailgating going on at the gates and also speeding in the Village. Kristi said the officers work hard to track down the tailgaters. “The purpose of the gates is to give us a lesser criminal environment. But I will tell you right now, the criminal element will establish itself wherever allowed. That takes all of us working together. You can’t just rely on us. We can’t do it alone…If you see something, say something.”

If someone is tailgating into the Village, try to get a license plate number and call 911. Do not try to block or follow the person.

The gate cameras have been replaced and are much more helpful than in the past.

Visitors for yard sales and other reasons need to be called in. Once they are inside the gates, the police do not follow the visitor to make sure they are only going to a specific location. The visitors are given a one-day pass.

When fully staffed, the HSV Police Department has 22 officers. Currently, they are down three and may soon be down four officers.

Kristi said her husband, Joe, is a Little Rock native and retired from the Texarkana police force after 25 years. “He was the Swat Commander, the gun nut – he knows all about those things,” shared Kristi. After retiring from the force, Joe was the Miller County Emergency Manager for the past four years. Kristi said Joe is a great resource and is knowledgeable about radio systems.

A member of the audience asked if we have canine officers. “We do not,” said Kristi. A canine dog costs around $27,000 to $30,000. Kristi said, “We have to focus on the resources we need right now and the police cars are our number one need.”

Kristi said that a lot of police calls involve mental health and there are not a lot of resources for the police to be able to handle those things. “We’re not doctors. We’re not mental specialists,” stated Kristi.

A Villager asked, “Are we able to compensate our officers for retention purposes, comparable to the surrounding areas?”

Kristi responded, “Our General Manager, Kelly Hale, has been incredible. He values his employees. I can already see that he is invested in this community and is going to ensure that our officers are paid at an acceptable rate. And that is going to take some time. We have a lot of work to do. [She is referring to the infrastructure.] “I am going to try to work with the state on getting some grant funding. I know the saying has been, ‘We’re a private entity.’ If you look at statutes, they say we qualify for equipment and training and I am willing to do everything I can to make sure that we provide these guys with the training and equipment.”

The direction of the Agency

Kristi said she has given all 22 officers an agency evaluation form. Kristi plans to work with the team on their strategic plan and her philosophy is “firm, fair, and consistent.”

Presence of Saline County Officers a Few Weeks Ago

An audience member asked about the presence of Saline County Police Officers in the Village a couple of weeks ago.

Kristi explained, “Unfortunately we had an individual that was struggling with some drug addiction, that was contemplating ending his life. We wanted to do everything we could to get him the help that he needed.” Law enforcement is a big family and they help each other when needed. “If we need anything, we know we can call on any of our sisters and brothers in blue…So, in that situation, we did. We called in for additional help. Fortunately, the individual went with LifeNet, and hopefully, he is getting the help that he needed.”

Kristi said the Neighborhood Watch was “an incredible tool for policing” in the 80s and 90s. “There is no better crime fighter than our community and the person who knows the community knows what people are supposed to be next door, knows who is coming and going.”

It is not realistic to think that because HSV is a gated community that there will not be any crime. Kristi said, “We know that we have an excellent police force here to deal with any type of criminal activity that we have and make sure that we set the precedence that we are not going to put up with that here. That is going to take a group effort.”

Pastor D is a volunteer police chaplain. He said he has been the chaplain for both the police and fire departments for nine years. He said there are a lot of things going on that the police understand, but the public does not. He tries to help the officers by relieving the pressure off them. Pastor D said, “These guys [HSV police officers] take it to heart, whatever they do. They are not just filling the position.”

Where Does Citation Money Go?

The money from citations primarily goes to the State of Arkansas. “That happens in every city and county,” said Kristi. Continuing, Krisi said, “that is what funds our State Police Department.”

Village residents are invited to a “Meet and Greet” BBQ on July 29, to welcome our new police chief, Kristi Bennett.  Not only will you have the chance to meet Kristi Bennett, but you will also have the opportunity to recognize and thank all first responders – police officers, firefighters, and LifeNet personnel. 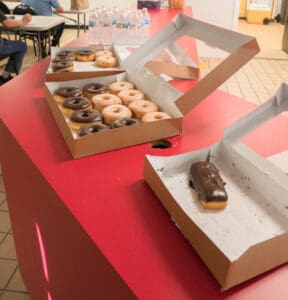 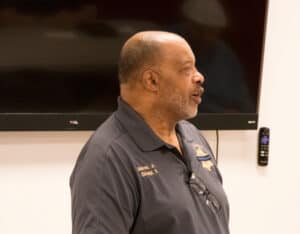 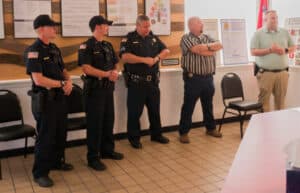 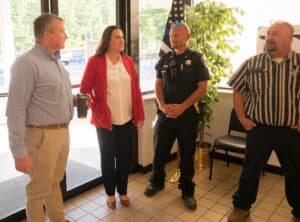 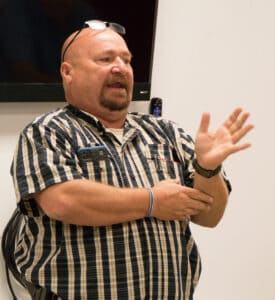 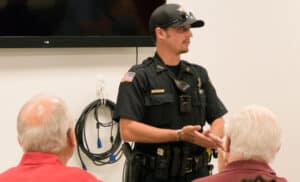 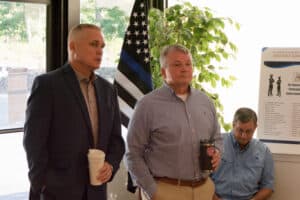 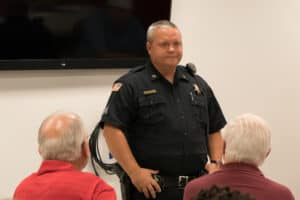 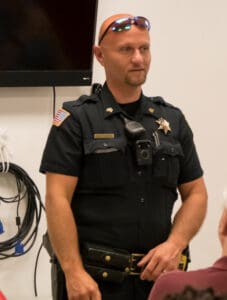 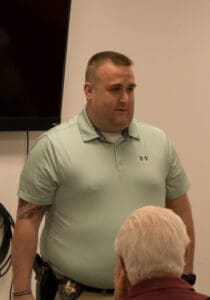 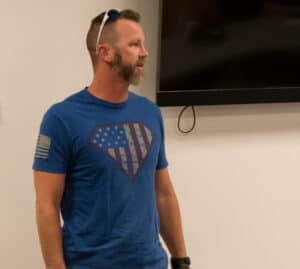 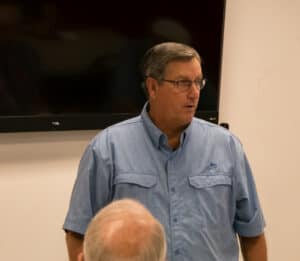