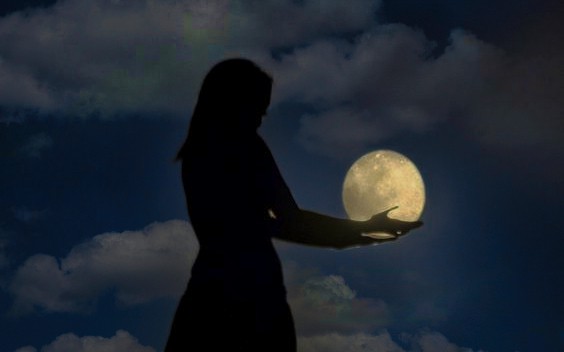 This is a continuation. To start at the beginning of the series click here.

The four females had talked and laughed and eaten until their tummies were full and the dish of lasagna was empty. There was one tiny half of a brownie left, and the iced tea pitcher had been drained. They had covered almost every discussion topic in the free world, until finally one of them, this time it was Audrey, finally crossed over the fine invisible line between conversation and gossip. The other three ladies, not wishing to be judgmental of their friend, decided to dive right into the juicy subject she had raised: Missy Matson.

“Oh, girls, she doesn’t even use the name Missy Matson anymore! She is now known as “Madame Zsa Zsa, Fortune-teller and Life Advisor!” Audrey tossed her napkin in the air as a way to accentuate the jaw-dropping statement. “She has gone full-on Gypsy!”

Lena sat, wide-eyed and temporarily speechless. This meant it was Maureen’s turn to provide the certainly reliable information she had overheard at the nail salon. “She came back from that vacation to Romania a completely different person. She has a crystal ball heavy enough to use in a bowling tournament down at Fiesta Lanes!”

Lena snapped to, and sputtered, “But, what connection does she have with gypsies? She is from Texas, for Pete’s sake! There are no gypsies in Texas, and why in the world did she go to Romania for vacation?”

“It all started when she had her DNA checked through one of those ancestry websites, rumor has it. Seems that one of her family lines ran right back to the Transylvania region of Romania. At first, she started researching ‘Vampires in Transylvania’, but didn’t find any of her family names linked to Vlad the Impaler or any such horror. What she did discover in her research, though, was that there are nearly three-quarters of a million “gypsies” in Romania. When she looked up gypsy names, she kept running across names she had seen in the family tree research done by her cousin. Next thing you know, Missy and her cousin are booking a vacation in Romania. Thus ended the sane, productive All-American life of Nurse Missy Matson, and in her place was born “Madame Zsa Zsa”! Maureen had managed to get all this news story out in one burst, only pausing for a couple of quick breaths.

Bette piped up now, “Oh, my word, that’s right! She was a nurse! I had forgotten that. She has degrees in nursing for both humans and animals. She is a very intelligent woman – or she was. How could this happen?”

“Surely, the village Property Owners’ Association won’t allow her to peddle her fortune-telling hogwash inside the gated community, will they?” Lena asked.

Audrey just so happened to know the answer to that one. “They won’t let her go door-to-door, of course, but if she gets a permit and sets up an actual physical storefront location in one of our shopping centers, I think they will allow it.”

Lena was miffed by this news. ‘Well, you know it is just an open invitation to all kinds of crime and danger. Gypsies are known to steal and swindle people. Why, even Cher had a song called, ‘Gypsies, Tramps and Thieves.’”

Bette chuckled. “Well, there is no more reliable source than Cher!”

“You know it, ladies!” said Lena, as she scooted her chair out from the table and turned to the counter to start preparing another pitcher of tea.

Seeing the tea bags and kettle, the other three ladies simultaneously decided that their bladders had been filled with plenty of tea for one day, and they each in turn gathered up their purses, empty serving dishes, etc., and told Lena they would see her tomorrow. They thanked her profusely for the lovely time they had just shared, and filed out the door.

Lena was tidying up the kitchen when she heard a faint tinkling sound outside. Looking out the window, she was startled to see a blonde woman walking through her yard, dressed in long, colorful clothing of a very exotic style. Her golden locks flowed down her back, but the top half of her coiffure was wrapped in a purple and gold scarf, very ornate, with golden coins dangling all around the edges. The woman walked swiftly, as if with great purpose. Obviously she had a destination in mind, and was not wandering around lost. Lena was frozen in her tracks, standing at the kitchen window, mouth agape.

“So, this is Madame Zsa Zsa, I presume!” she finally whispered, to no one there.

In less than two minutes, the woman had disappeared into the woods just past the edge of Lena’s yard. Lena stared until the figure was completely out of sight, then a strange odor caught her attention. Even inside the house, with doors and windows closed and locked, a definite smell of spicy incense wafted through the kitchen. It wasn’t just an unpleasant odor – it sent a shiver down Lena’s spine. She could literally smell danger.

Meanwhile, a little deeper in the woods, Norman was enjoying his delusions of grandeur. The voice that he had heard earlier had proclaimed him to be a genius! A winner! Invincible! What a day this was going to be, and what a night he had planned!

All the years that Norman had been using the same pharmacy, he always watched to see which shelves his meds were coming from. He’d know exactly which spot to rush to tonight with his big trash bag, to load up the goodies.

Poor Norman, invincible or not, he didn’t have a clue that the pharmacist took the Schedule Two drugs off the shelf every night and locked them in the safe. Norman would be standing in front of an empty section, staring and blinking in shock. There would be not one single bottle of the medicine he needed so badly. Likewise with the ones he thought he could sell to paying customers. Unless he wanted to try peddling antibiotics and blood pressure medicine, he would be one out-of-luck “winner”.

Well, all this would be for him to discover tonight when he broke into the pharmacy, using the brilliant plan he had concocted. He knew there was a motion-detecting alarm in the store, so he wouldn’t have long to dilly-dally once he was inside, but he figured he wouldn’t need long. He knew just how to make his triumphant entry to “Candy Land”. He would use a large bit in his cordless drill to bore a hole in the back door of the pharmacy. Then, he would insert the blade of his reciprocating saw into the hole and cut a quick, large arc that he could force open with a good hard kick. As soon as he set a foot into the store, it would be “go time” because the motion detector would get him and set off a shrieking alarm. All this he knew.

What he didn’t know, poor Norman, was that the pharmacist had long ago had his fill of “geniuses” who drilled a hole in the back door and used a reciprocating saw to push through the thin metal and fiberboard of the back door. Yes, indeed, Mr. Pharmacist had called the nice folks at the sheet metal and welding shop to come and install a solid sheet of heavy steel over the entire back door.

Poor, oblivious Norman. Oh, well, he was enjoying his day so far, not knowing that soon his careful plans would blow up quicker than the Hindenberg.

Norman had found himself a cozy perch inside his hideaway and was finishing off a bottle of water, when suddenly a tinkling sound caught his ear. He froze and listened, carefully. It came closer very quickly. Norman took his knife from its sheath and scooted quietly behind a stack of crates, barely breathing now.

Suddenly a rapid pounding on the door of his hideout frightened him half out of his wits. Someone at the door! Nobody ever comes to the door here!

A terrifying thought forced its way into Norman’s mind – the door was not locked! He hadn’t locked it, because no one but him ever comes to this place.

Sure enough, the knob turned. Slowly at first, then with a sudden thrust the door flew open and in stepped a woman dressed head to foot in colorful garments, exotic and dazzling. There were golden coins dangling all around the scarf that enwreathed her head…

CLICK ON THE AUTHOR BLOCK BELOW TO GO TO NANCY’S LISTING OF HER BOOK, THE DIERY, ON AMAZON.COM