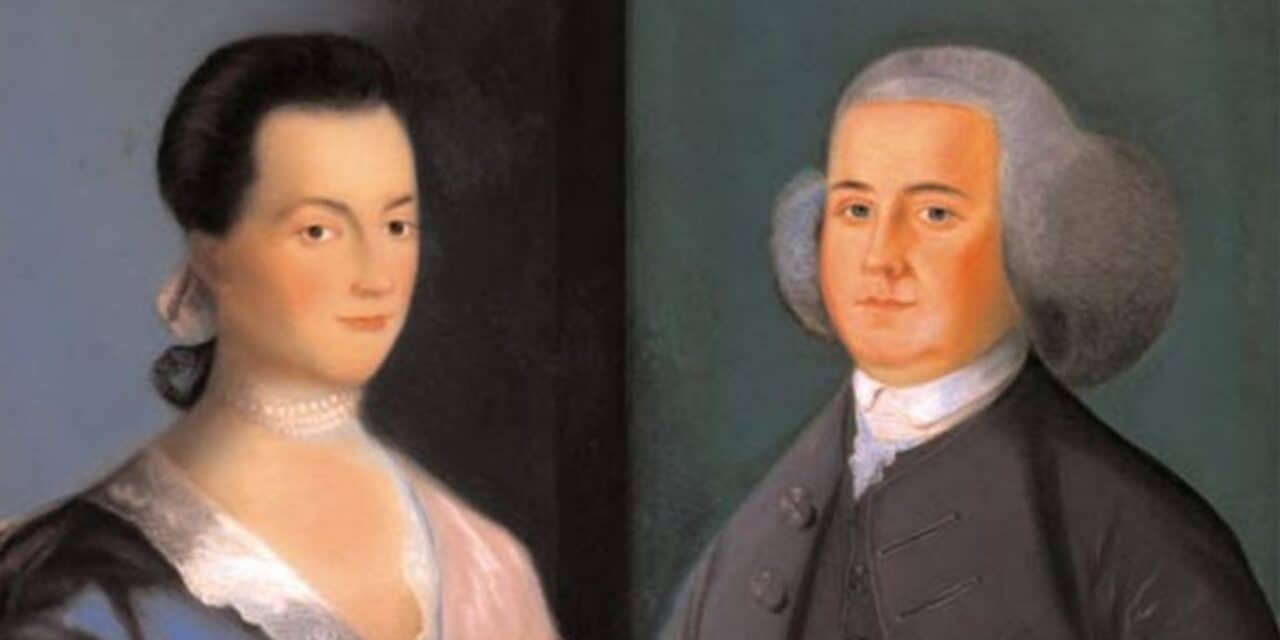 This month marks the 287th anniversary of the birth of John Adams on October 30, 1735. He was born in Braintree (now Quincy), Massachusetts. Many modern-day history books address America’s founding era with a limited treatment of Adams while typically emphasizing Washington, Jefferson, and Madison. Though we remember John Adams as the second President of the United States, it is well worth our time and space here to take a quick look at this patriot whose life played such an enormous role in our nation’s birth and early years.

This month also marks the 258th anniversary of the marriage of John Adams and Abigail Smith on October 25, 1764. It was perhaps the most exemplary, enduring, and consequential marriage among any of our Founding Fathers and Founding Wives. The marriage of Abigail and John Adams was one of mind and heart, a unique and special combination of friendship and mutual love and respect. While her unwavering love and loyalty to her husband and family were preeminent, she was a self-educated and accomplished woman in her own right and was never afraid to boldly express her opinions in private and in public. This was evident in a March 1776 letter to John and the Continental Congress, requesting that they, “…remember the ladies, and be more generous and favorable to them than your ancestors…”

Abigail would give birth to five children, raising them and managing the family farm often alone while John was away on trips practicing law or serving his country. One trip lasted three long years. Her steadfastness and courage provided security and stability to her family during the War. Her son, John Quincy, described that time as “the space of twelve months [in which] my mother, with her infant children, dwelt, liable every hour of the day and the night, to be butchered in cold blood. My mother…was bred in the faith of deliberate detestation of War…Yet, in that same spring and summer of 1775, she taught me to repeat daily, after the Lord’s Prayer…” Through the letters they wrote to each other during their 54 years of marriage, it is evident that there would likely not have been the John Adams of America’s history without Abigail Adams.

John Adams graduated from Harvard College in 1755, taught school for several years, and then moved to Boston where he became a leading attorney for the Massachusetts Colony. He possessed such a strong sense of justice, respect for the law, and moral courage that he defended British soldiers who had taken part in the Boston Massacre in 1770. Charged with manslaughter, the soldiers in Adam’s view were following orders and didn’t merit the extremely severe treatment they were receiving. Adams thought that his viewpoint and stand would cost him his professional future, but they did not. In Adams’ words, “where there is no law, there is no liberty.”

A man of principle, conviction, and superb statesmanship, Adams more than any other individual is responsible for the 4th of July and the independence for which it represents. According to one historian, Jefferson provided the words to the Declaration of Independence, but Adams begat the deed. In fact, Jefferson’s authorship of the Declaration was due primarily to Adams’s self-denial and influence. Even as early as 1776, Adams was the first man in America to suggest the method whereby a people might write their own constitution, a deed virtually never seen before in human history. Eleven years later, some of America’s greatest leaders and statesmen did just that.

John Adams thought societies of men were indeed capable of establishing good government, but he also understood the fallen and fallible nature of man and the consequential pitfalls of sustaining that good [self] government. In his words, “We have no government armed with power capable of contending with human passions unbridled by morality and religion [Christianity]. Avarice, ambition, revenge, or gallantry, would break the strongest cords of our Constitution as a whale goes through a net. Our constitution was made only for a moral and religious people. It is wholly inadequate to the government of any other. The only foundation of a free Constitution is pure virtue, and if this cannot be inspired into our People in a greater Measure than they have it now, they may change their rulers and the forms of government, but they will not obtain a lasting liberty.”

John Adams also was a firm believer in the role of education and active and informed citizenship in keeping America a nation of free people. Through his Dissertation on the Canon and Feudal Law (1765), he speaks to us more today in the fall of 2022 than perhaps ever before:

“And liberty cannot be preserved without a general knowledge among the people, who have a right, from the frame of their nature to knowledge, as their great Creator, who does nothing in vain, has given them understandings, and a desire to know; but besides this, they have a right, an indisputable, unalienable, indefeasible, divine right to that most dreaded and envied kind of knowledge, I mean, of the characters and conduct of their rulers. Rulers are no more than attorneys, agents, and trustees for the people; and if the cause, the interest, and trust, are insidiously betrayed, or wantonly trifled away, the people have a right to revoke the authority that they themselves have deputed, and to constitute abler and better agents, attorneys, and trustees.

“The true source of our sufferings has been our timidity. We have been afraid to think. We have felt a reluctance to examine into the grounds of our privileges, and the extent to which we have an indisputable right to demand them, against all the power and authority on earth. And many who have not scrupled to examine for themselves, have yet for certain prudent reasons been cautious and diffident of declaring the result of their inquiries.

“Let us dare to read, think, speak, and write. Let every order and degree among the people rouse their attention and animate their resolution. Let them all become attentive to the grounds and principles of government, ecclesiastical and civil. Let us study the law of nature; search into the spirit of the British constitution; read the histories of ancient ages; contemplate the great examples of Greece and Rome; supported and carried them through all hardships with patience and resignation. Let us recollect it was liberty, the hope of liberty for themselves and us and ours, which conquered all discouragements, dangers, and trials. Let the pulpit resound with the doctrines and sentiments of religious liberty. Let us hear the danger of thralldom [bondage] to our consciences from ignorance, extreme poverty, and dependence, in short, from civil and political slavery. Let us see delineated before us the true map of man. Let us hear the dignity of his nature, and the noble rank he holds among the works of God, — that consenting to slavery is a sacrilegious breach of trust, as offensive in the sight of God as it is derogatory from our own honor or interest or happiness.”