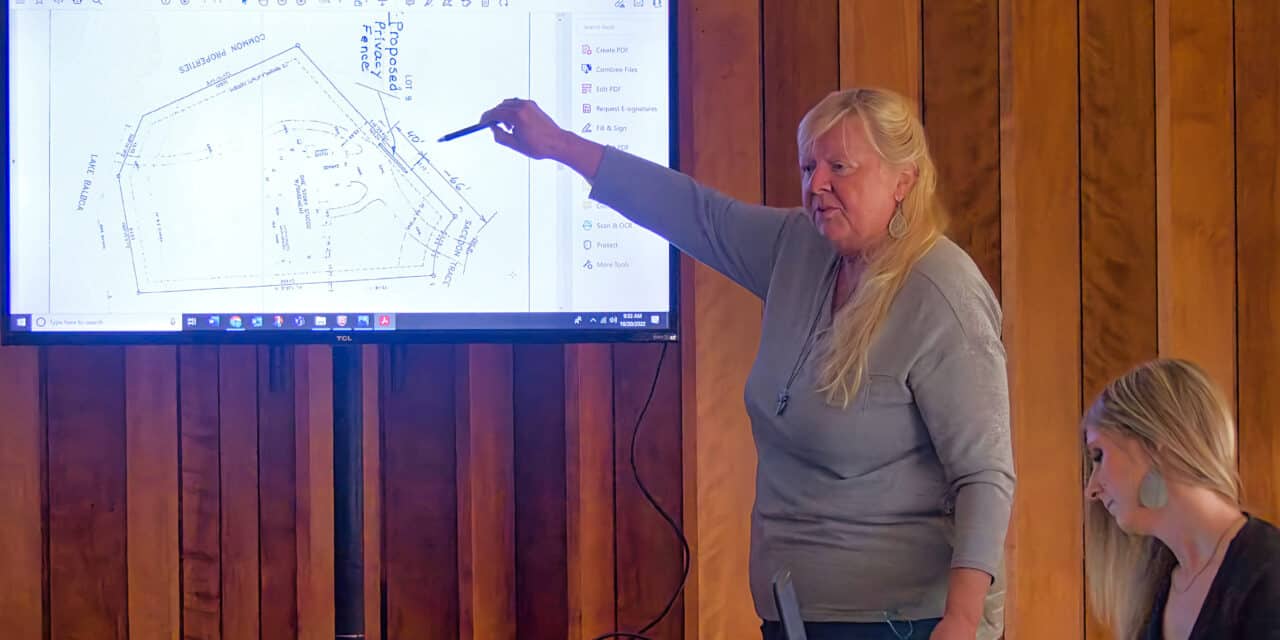 A new property owner was frustrated with being fined $150 for not obtaining a permit on a landscaping project; another property owner was upset with his neighbor for building a wall around Part of his patio; Chair Rowe updates ACC on new Ad Hoc Rules Committee Meeting; New commercial build plans need state stamp of approval before a building permit is issued by the POA

The Hot Springs Village Architectural Control Committee (ACC) met on Thursday, October 20, 2022, for its regular bimonthly meeting. The committee discussed twenty-three (23) permits on existing properties, five (5) new home permits, and one permit for commercial property. Two permits were denied, and some approvals had stipulations that must be met first.

Staff Present: Ginger George, Contract and Development Supervisor, represented the POA Staff at the meeting. George was recently promoted to this position.

Rowe said the committee discussed wording changes and said the Ad Hoc Rules Committee does not favor the registration of indoor cats. (No rule changes are in effect until the Board has approved them.)

The ad hoc committee will finish reviewing section two and start on section three at their next meeting. Section three talks about fences and sheds, etc. Rowe said, “If you guys feel the urge to wade through that document, the latest update, September 12, is where it is frozen.” You can find this document on Explore the Village website. Also, see the pdf below.

Rowe said she will take any questions, concerns, or ideas from the ACC to the next ad hoc meeting. “There is not a lot of cohesiveness on the committee. The committee is made up of different people from different committees, other than ours, well Tucker [Omohundro] is there. A lot of people didn’t even know the rules. They are new to the Village. Not to say, Brian, that that is a bad thing.’ They are feeling their way through it. Luckily they have Stephanie [Heffer] as the Chairperson, and she is very well-versed. She is kind of keeping them in line on that.”

5 Jerez Lane – Landscaping – The property owner was present at the ACC meeting. River rock was installed in the culvert area. Committee Member Poshard said the wrong rock was installed and rock with jagged edges, instead of river rock should have been used. This is so the rock won’t wash away. Poshard said there was a 12-inch culvert installed to deal with a lot of water. Poshard continued, “there are ways of taking care of this.” Concerning the planter, Poshard said, “when you install landscape timber there should be overlap, and this project does not have overlap.” Poshard said the way the timbers were installed without much overlap will lead to them pulling apart after a few years.

Poshard replied, “It is just a suggestion. Usually, that is one thing that landscapers usually do. I am just advising.”

The property owner said that despite going to the POA four times, she was not made aware that she needed a permit for this project. She would have rather paid $60 for a permit than get a $150 fine. She said only found out about the fine when she went up to the POA and that no one would return her phone calls or emails. “No one responded to my requests. I literally went up there every day for a whole week,” stated the property owner. She was told to attend the next ACC meeting.

The property owner said a lot of things were unexpectedly wrong with the house and projects have been expensive and difficult to complete and she is “frustrated.”

George said she would contact the property owner after the meeting when she returned to the office.

The permit was approved, and the ACC will work with the landscaper and property owner.

ACC said he will be fined, as no permit was issued. The neighbor said he doesn’t want the property owner to be fined, he just wants the project to be visually pleasing.

Rowe asked, “Are you on speaking terms with this property owner?”

The neighbor answered, “We have a yearly party, and he doesn’t attend. He doesn’t talk to anybody.”

The neighbor said he hopes we are not moving towards six-foot fences, where everybody has total privacy.

A committee member said, “What is wrong with privacy? Everybody is entitled to handle their property the way they want to handle it. Permit approved.

5 Estrella Circle – Landscaping – This is a new house by Harrison Construction, with Casa Verde doing all the landscaping. The landscaping is well underway, but without permit approval. Permit approved.

2 Tunica Lane – Parking – Seeking permission for existing gravel parking space. The property owner wants to park on the side of his house. Permit denied.

4 Bellota Lane – Deck – Extend existing deck 10′ by 12′. The handrail will be upgraded to meet code requirements. Approved contingent upon proper drawings being submitted. The permit will be issued once the drawing is satisfactory.

1 Alarcon Way – Room Addition – The property owner wants to enclose part of the carport to make it into a bedroom. All of the existing latticework will be removed. There will still be parking in the carport as it is very large. Permit approved.

2 La Vega Lane – Parking – No place to park in front of the house except for on the driveway The property owner said he was told when he bought this property that parking was already permitted out of sight in his backyard. Janet Rowe will contact Charles Brown as there is a little confusion about this permit application. Update: 2 La Viega is approved. The property owner cannot park in his backyard but can park parallel to the street. This was taken care of back in April and mistakenly got reassigned to the Permitting Office.

28 Jardin Way – Enclose Patio – raise the patio slab to be the same as the house and enclose the patio. Will extend the gable of the existing room and the materials will match the house. Permit approved.

3 Redondo Trace – Fence – 5′ tall black ornamental metal fence. This will enclose the grinder. Approved upon the condition that the property owner coordinates with Public Services to make sure there is access to the grinder.

6 Forjador Lane – Patio – Extend existing patio with stone patio. Steps will also be built out of flagstone, and a 24″ retaining wall will be installed. Permit approved.

4 Commerce Drive – East Village Centre – Plans for this project were submitted to the HSVPOA Permitting Department, but before approval by the ACC and the HSVPOA, the project plans need a stamp of approval from the Department of Finance and Administration for the State of Arkansas. Supervisor George said it is very possible the plans have been stamped, but just not on the copy presented to the committee. The Permitting Department will make sure the project is in accordance with state law and will not issue a permit without a state stamp. The project is approved by the ACC pending the state stamp.