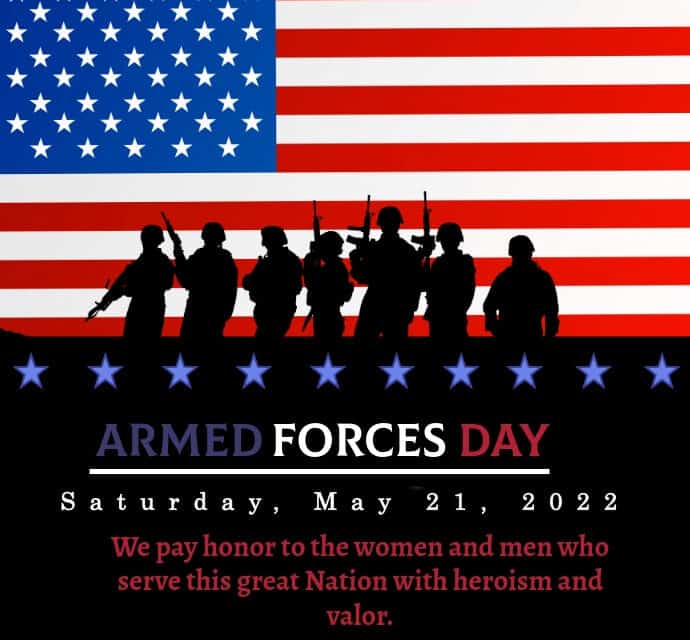 Seventy years ago this week, May 17, 1952, the New York Times published an article in reference to the armed forces of the United States. The occasion of this writing was two-fold. First, in reference to a special observance: “This is the day on which we have the welcome opportunity to pay special tribute to the men and women…who are in the service of their country all over the world. Armed Forces Day won’t be a matter of parades and receptions for a good many of them. They will all be in the line of duty and some of them may give their lives in that duty.” Second, this was during the Korean War (1950-1953), when this truth especially hit home in real-time to service families back home.

On August 31, 1949, Secretary of Defense Louis Johnson announced the creation of an Armed Forces Day to replace separate Army, Navy, and Air Force Days. The single-day celebration stemmed from the unification of the Armed Forces under one department — the Department of Defense. In an excerpt from the Presidential Proclamation of February 27, 1950, President Harry Truman stated: “Armed Forces Day, Saturday, May 20, 1950, marks the first combined demonstration by America’s defense team of its progress, under the National Security Act, towards the goal of readiness for any eventuality. It is the first parade of preparedness by the unified forces of our land, sea, and air defense. I invite the Governors of the States, Territories, and possessions to issue proclamations calling for the celebration of that day in such manner as to honor the Armed Forces of the United States and the millions of veterans who have returned to civilian pursuits.” President Truman also called upon fellow citizens to “display the flag of the United States at their homes on Armed Forces Day and to participate in exercises expressive of our recognition of the skill, gallantry, and uncompromising devotion to duty characteristic of the Armed Forces in the carrying out of their missions.” The Marine Corps League refused to remove support for Marine Corps Day, but still supports and participates in Armed Forces Day. The Coast Guard, though in the Department of Homeland Security, participates as an equal partner in Armed Forces Day activities. It also celebrates its own anniversary day.

Since 1950, Armed Service Day has been observed on the third Saturday in May each year. This year it will be observed this Saturday, May 21. While Memorial Day honors those who died defending our country and Veterans Day honors U.S. Military veterans – both living and deceased, Armed Forces Day recognizes those currently serving. According to the United Services Organization (USO), Armed Forces Day was originally intended to serve as a type of “educational program for civilians,” to promote an increased awareness of the Armed Forces, to expand public understanding of what type of jobs are performed in the military, and the role of the military in civilian life. It was a day for the military to show “state-of-the-art” equipment to the civilian population they were protecting. And it was a day to acknowledge and honor the people of the Armed Forces of the United States. This special day has traditionally been observed through military-sponsored parades, air shows, tours of ships and planes, exhibits for children, and open days on military bases.

We continue to live in a world that is not all that removed from 1950, where nuclear tensions, political turmoil, and social and cultural instability are still pretty much the norm. Though not officially declared, wars of varying kinds are still being fought and new challenges continue to arise for our military, not only overseas but here at home as well. Our Armed Forces are not only dependent on having the necessary training and equipment and leadership to be the best fighting force in the world, but they also depend on the support and prayers of a grateful nation. This is every American’s call to duty!

As President John F. Kennedy expressed it 60 years ago, after declaring Armed Forces Day a national holiday, “Only when our arms are sufficient beyond doubt can we be certain beyond doubt that they will never be employed. The support of an informed American people is increasingly important to the Armed Forces in these days of rapid technological advances, quick reaction time, and grave threats to our freedom. I, therefore, encourage members of the DoD to observe Armed Forces Day by informing the American people of our ‘Power for Peace’ and by confirming their faith that in our strength we will remain free.”