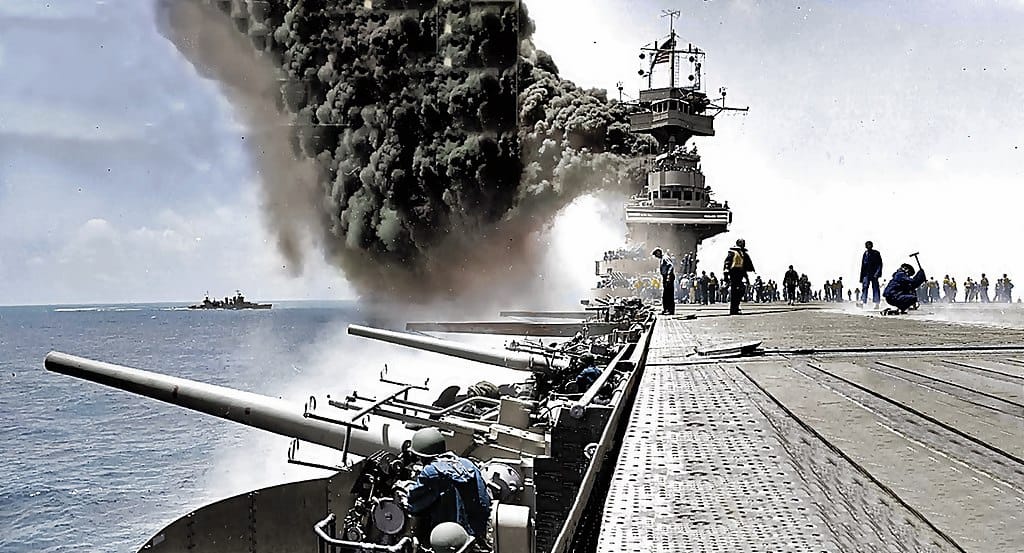 Midway – REFLECTIONS FROM HISTORY AND FAITH BY JEFF OLSON, 6-3-22

When the date of June 6 comes up on the subject of World War II history, usually we think of D-Day, the Allied invasion of Normandy which essentially began the liberation of Europe from Nazis Germany. However, another very important event also occurred during this week two years previous – an event which turned the tide of the war in the Pacific theater and perhaps changed the map of the post-war southwest Pacific.

The Japanese attack on Pearl Harbor on December 7, 1941 dealt a severe and crippling blow to America’s Pacific fleet and air power. Fortunately, America’s aircraft carriers were not at Pearl Harbor that day, which the Japanese were counting on.

Few if any military powers in history had ever conquered more territory in six months (December 1941-June 1942) than had Japan. Its Pacific Empire ranged from the Indian Ocean to the coast of the Aleutian Islands, and from the Russian-Manchurian border to Wake Island in the Pacific. However, the Japanese were not finished. They were still on the move with even greater westerly ambitions.

Regretting the absence of the U.S. Navy’s fleet carriers at Pearl Harbor, and embarrassed by the Doolittle Raid against Tokyo, Admiral Yamamoto Isoroku, commander in chief of Japan’s Combined Fleet, was determined to annihilate his American opponents in a decisive battle somewhere in the central Pacific. The location he selected was the tiny atoll of Midway, some 1,300 miles northwest of Pearl Harbor. Midway hosted a large U.S. military presence and it allowed the U.S. to project power throughout the Central Pacific by offering anchorage to its submarines and aircraft carriers. If the island were to fall to Japan, the Imperial Navy and Air Force could turn that projection around, towards Hawaii and the U.S. western coast and use it as an advance base that would establish an eastern shield for its own Pacific operations. Midway was also probably Japan’s best opportunity to destroy U.S. naval power in the Pacific before America’s enormous industrial capacity created another new fleet entirely. With a captured Midway Island, Yamamoto hoped that then the U.S. would sue for a negotiated peace, securing Japan’s conquests in Asia.

The odds in the battle favored the larger, more experienced Japanese Navy. The imperial fleet had four carriers to the Americans’ three, supported by many battleships, cruisers, and light carriers as part of the largest armada that had ever steamed from Japan. In addition, and most important of all, would be U.S. Navy Intelligence successfully breaking the Japanese naval code. While U.S. Commanders gave some consideration of these intercepts as possibly fake or diversionary, it was their judgment that Midway was in fact the target for the Japanese forces. Enough information was gleaned from the code-breaking that a defense could be planned and remove the element of surprise which the Japanese were counting on.

Admiral Chester Nimitz, the Commander of the U.S. Pacific Fleet, executed an innovative, risky, and expeditious plan to engage the Japanese. He sent his three carriers, Yorktown, Enterprise, and Hornet, to rendezvous at what was called Point Luck, some 300 miles northeast of Midway, and await the advance of Yamamoto’s armada. The concluding words of the entry in the CinCPac Command Summary for June 3 were prophetic: The whole course of the war in the Pacific may hinge on the developments of the next two or three days.

Eighty years ago this week, the battle began early on the morning of June 4, 1942, when U.S. bombers from Midway Island struck ineffectually at the Japanese invasion force about 220 miles southwest of the U.S. fleet. Early the next morning, Japanese planes from the strike force heavily bombed Midway. Wanting to follow up on the first attack, they re-armed their bombers. However, in the midst of battle, scouts spotted the American fleet so the bombers were ordered to be refitted with torpedoes. Simultaneously, the Zeros defending the Japanese fleet returned to their carriers for rearming and refueling. At this moment, about 36 carrier-launched U.S. ‘Dauntless’ dive-bombers approached the Japanese carriers.

According to Mitsuo Fuchida, the air-strike leader of the Japanese carrier force that attacked Pearl Harbor, the American bombers were unimpeded because our fighters, which had engaged the preceding wave of torpedo planes only a few moments earlier, had not yet had time to regain altitude. Consequently, it may be said that the American dive-bombers’ success was made possible by the earlier martyrdom of 37 of their 41 torpedo planes. The Japanese had been caught flatfooted in the most vulnerable condition possible–decks loaded with planes armed and fueled.

As a result, three of the heavy Japanese carriers were sunk. Later in the day, U.S. planes disabled the fourth carrier but its aircraft had badly damaged the U.S. carrier Yorktown. On June 6 a Japanese submarine fatally torpedoed the Yorktown and an escorting American destroyer. Given the loss of their carriers, the Japanese had already begun abandoning any efforts to land on Midway.

As we look back 80 years later, the Battle of Midway was one of the most important naval battles in world history, one which turned the tide of World War II in the Pacific. It is an inspiring story of bravery and sacrifice which we should memorialize and remember every year. However, it is also a story of leadership, ingenuity, calculated risk, improvisation, resilience, decisiveness, and yes – perhaps what some would call luck.

In the words of Sir Winston Churchill: “The annals of war at sea present no more intense, heart-shaking shock than this battle, in which the qualities of the United States Navy and Air Force and the American race shone forth in splendour. The bravery and self-devotion of the American airmen and sailors and the nerve and skill of their leaders was the foundation of all.”

“Scene on board USS Yorktown (CV-5), during the Battle of Midway, 4 June 1942, shortly after she was hit by three Japanese bombs on the same day, what would cause the sinking of the aircraft carrier on 7 June 1942, in which 141 men were killed. The Battle of Midway, however, was a decisive naval and air battle for the US Navy and widely considered a turning point in the Pacific War. Dense smoke is from fires in her uptakes, caused by a bomb that punctured them and knocked out her boilers. The engineer with the hammer at the right side is most likely covering a bomb entry hole in the forward elevator. Note arresting gear cables and forward palisade elements on the flight deck; CXAM radar antenna, large national ensign and YE homing beacon antenna atop the foremast; 5″/38, .50 caliber and 1.1″ guns manned and ready at left. This picture was taken by Photographer 2nd Class William G. Roy from the starboard side of the flight deck, just in front of the forward 5″/38-gun gallery.”
04/06/1942

This image has been colorized.