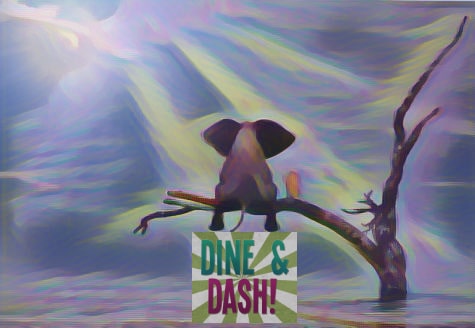 This story is going to shock some of you. I know it shocked me. Hot Springs Village is a beautiful and nice place to live and most folks are stellar. But there are always a few exceptions to the rule. And that is what this story is about, the deviation from the norm.

On April 11, 2022, Joseph and Jennifer Stansel, co-owners of the Blue Elephant at Granada Golf Course in Hot Springs Village, Arkansas, reported that they were having some problems at their restaurant.  Joseph published an article on the Blue Elephant website about these issues.

“When you come to Hot Springs Village theft isn’t something you’d expect to be an issue. Hot Springs Village is a 26,000-acre gated community adorned with many beautiful golf courses, lakes, well-kept homes, and smiling faces but there is a very dim side of the 1000 Points of Light community that most of you hopefully will never have to experience.

“There is an underlying odor of entitlement that has fueled the rationale that stealing from village businesses is somehow vindication for their dissatisfaction with local businesses, increases in POA assessments, and community politics in general. I say this not based on speculation but from one on one conversations I have had with those I have confronted in the act of what is called “Dine and Dashing”. This is a form of theft in which an individual or group dines at a restaurant and then when they see an opportunity to leave without paying they walk out without paying. My wife and I witnessed a couple do this on our first visit to Raffaella Rose just after we moved here in 2019. The waitress was overwhelmed and having a hard time keeping up with everyone. The couple walked out without paying and the waitress didn’t even notice.

“Fast forward to 2022 and we now have our own restaurant here in Hot Springs Village called the Blue Elephant Grill. It is located on the beautiful Granada Golf Course and we are faced with theft from fellow neighbors on a scale that’s just unimaginable!

“We operate a little differently here than many of our neighboring restaurants in that we don’t have waitstaff. Covid upended the restaurant business and staffing has been a real issue for restaurants. When customers come in, they order at the counter much like Newks and many other restaurants. The beverage bar, silverware, condiments, etc. are all self-serve. We bring the food out to you when it’s ready and then we bus and clean up the tables when you are finished. This process makes “Dine & Dashing” a non-issue. However, we have a weak spot and that is our Sunday brunch buffet from 10-2. Folks come in groups and sometimes pay in groups so we just welcome everyone in to help themselves at the buffet, find a seat and when finished come up to the register and pay. Unfortunately, the honor system doesn’t work very well for those who lack honor, and over the past few months as our Sunday brunch crowds doubled, tripled, and quadrupled our paying customers and revenue actually decreased so much that we are losing quite a bit every week hosting the brunch that residents said they really wanted.

“I waited to say anything publicly because I didn’t want to believe our neighbors would do this to us. The numbers are staggering! Many of you may remember the week we “sold out”? Well, we did run out of food but at least half the partakers didn’t pay! We got a lot of congratulations from folks about the increase in business but sadly the reality was we were in the midst of a theft epidemic! On April 12th we changed things up a bit and required payment first for the buffet which caused many to turn around and walk out. This was disappointing at first but we quickly realized that most of those were the ones lacking honor and we are thankful for the lovely ones who are honorable and dined with us. We didn’t fill our dining room on April 12th and we were nowhere near running out of food, but we did have our largest sales numbers from the buffet to date! This is wonderful and overwhelmingly disappointing at the same time! It really makes me wonder how bad this is at the other village restaurants and if they are even aware.

“The question now is do we continue the buffet or cancel it? We debate this because of the issues that came after the payment changes. It caused an uptick in rude behavior towards our staff and even retaliatory actions. Someone took our pancake syrup dispenser and dumped all the syrup into the pancake batter dispenser housing making an incredibly sticky mess that took forever to clean up! I had to throw the tablecloth away. This concerns me greatly because it takes a special kind of evil person to do things like this and unfortunately it’s not just one person or a small group that is lacking in the honor department. We are talking about 50 – 100 per week every week since about February! It’s absolutely sickening and it has cost us thousands. I asked one guy why and his response floored me! He said, “As long as you get free rent we should be able to eat here for free”! His rationale was that his POA assessments were somehow making me filthy rich. If he only knew the sacrifices we made to stabilize Granada! Another family came in and conversed when they found out payment would be required first. Apparently, the six of them had been coming in and eating off the buffet but only paying for a few. They decided to go elsewhere once they realized it wasn’t going to be free.

“I want my fellow business owners to be aware! I want every business owner to be successful. My wife and I have built and owned businesses all over the country and never before have we experienced theft on this grand of a scale by a community ever! The honorable folks in our community need to be alert and help root out this disease that is tearing our community down! We haven’t decided yet what our long-term plans are. I just hope and pray that folks will bring some honor and decency back into their lives.”

I reached out to Joseph Stansel for an update on April 26. Joseph told me that he received a letter/email from one of his customers. It seems as if there is a new type of “Dine and Dash” occurring. I requested that Joseph share the letter with me. Here is a copy of the letter with the name of the customer redacted.

Joseph shared the following comments with me:

“We understand that we aren’t everyone’s cup of tea. We are NOT a fine dining restaurant. We are running our business differently than Granada in the past. Many are annoyed by this but I can tell you with confidence that if we were going by the same old model we would have closed already. Business traffic at Granada doesn’t support a large staff. Yeah, we have a few busy periods but there are way more times we are here with an empty dining room.

“There is a lot more I could say but I’m out of time. I just want our customers to know we love them and appreciate their kind words and business. We understand that the majority of villagers are kind. Sadly we have a portion that thinks they are above the rest of us. I’m glad that the good folks of the village are taking a stand against those who are staining the reputation of our community. It’ll take some hard work and time but I’m sure the damage they’ve done in our community can be mended.”

Thanks to Joseph and Jennifer Stansel for sharing this story with the community.