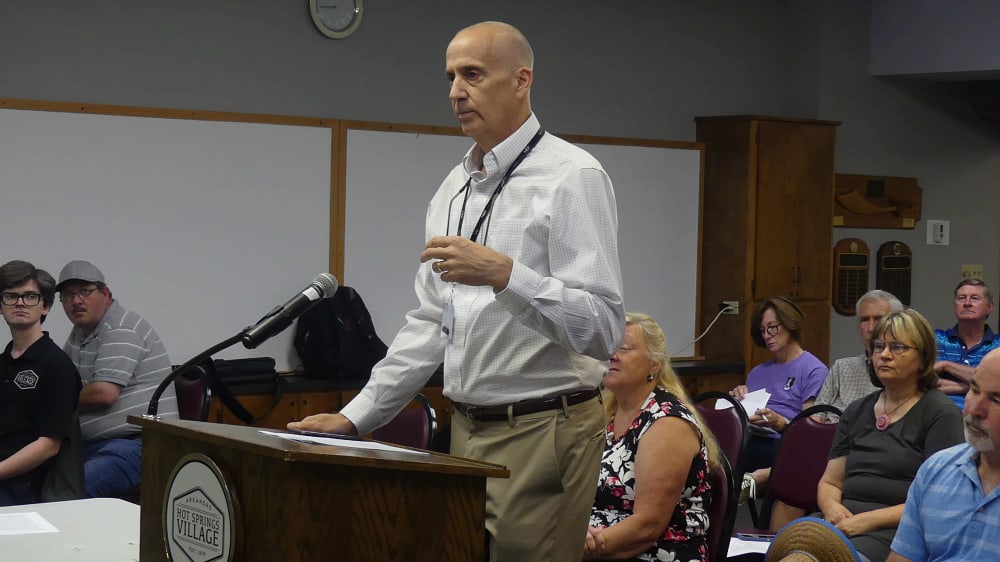 At the July 20, 2022 Board Meeting, Ken Unger, Director of Hot Springs Village Public Services, introduced several proposed changes in the Village Trash/Sanitation/Recycling/Leaf Pickup Services. Offering solutions, Unger explained the issues in three areas. Unger said, “some of the solutions could be predicated on our space over at the Minorca facility.” [CCI owns the surrounding land and also a portion of the land the POA is already using at this location. CCI has its reserve property for sale.]

Unger is soliciting feedback from the community and said he will have a formal proposal for the Board in the next month or two.

Unger said, “This is really more of an introduction proposal to the Board and the community, frankly, to discuss various issues that my department [public services] has been dealing with in relation to the implementation of the new sanitation system…, issues related to our recycling…and third, leaf pickup.”

Part One – Change in the Sanitation Program

Moving to the automated trash trucks has been a positive experience on some levels, but there have also been some problems. The automated trash system meant that staff was not required to ride on the back of the truck, resulting in a safer trash pickup. Staffing the old sanitation trucks was also becoming increasingly difficult.

The problems arising because of the new automated system are as follows:

Unger proposed to allow residents to bring their larger items to dumpsters at Minorca, where for a tipping fee, they can dispose of these bigger items. For those able to do this themselves, the wait for the special pick-up will be eliminated. The tipping fee would be less than the special pick-up fee. Depending on available space, this service might be opened up to local contractors. Unger is not suggesting the elimination of the special pick-up.

It is proposed that the tipping fees would be paid at the POA administration building.

Unger said that he observed that the satellite recycling facility at Grove Park was not working in a satisfactory manner. “It was filling up very quickly and recyclables were overflowing…” The overflow of recyclables caused more cleanup work for POA staff. “The first step in trying to resolve this issue was to bring it back to an area where we could control it better so we made the move to bring it to Minorca…,” explained Unger. In order to make the recycling go smoother, the hours were adjusted down. “For our organization to meet the needs of the community, we have to have it in a spot where we can control it,” stated the Director.

Unger explained, “The biggest issue we have with recycling is the plastic. North Garland County requires that that number 1’s and number 2’s are separated.” Currently, HSV is taking both categories into one bin and North Garland County has to sort this. Our trailer is being held up while they sort the plastics. This bottleneck affects our ability to offer recycling dropoff more than one day a week. We hope to be able to offer recycling twice to three days a week in the future.

Unger hopes to bring more information to the next Board meeting. Again, Unger wants the input of residents regarding the recycling issue.

Unger stated, “I have gotten a lot of response on leaf pickup and it has not been good. An adjunct to that is actually debris [sticks]. Right now we have this policy where you have to bundle it up; you have to keep it a certain size and then we take it.”

The paper bags fall apart when wet. They don’t hold as much as the plastic bags and now the POA is not seeing a lot of bundles. “People are not going to put their leaves or debris out. They are going to dispose of it the easiest way possible,” stated Unger.

Unger said, “We are looking at the ability for residents to have a special pickup for leaves – maybe a flat fee – that gives you a total limit of X number of bags and potentially the use of smaller trash cans [maybe those cans that residents used before the automated sanitation truck system was implemented). “I don’t know about you, but I have an extra trash can. I am sure a lot of our residents have extra trash cans right now,” said Unger.

The leaves and sticks will be taken to the pit located off of Terlingua Drive. The plan is to do periodic controlled burns under permit at the pit. The controlled burns will occur once or twice a year.

“In addition to the special leaf pickup, residents will be able to bring their leaves to the pit facility and dump them,” stated Unger. This would give residents who may not have a huge volume of leaves but want to get rid of them the right way, an option to do so. This might give residents the option to use biodegradable plastic bags instead of only paper bags. There would still be a requirement to purchase a tag if you choose to dump leaves and sticks at the pit.