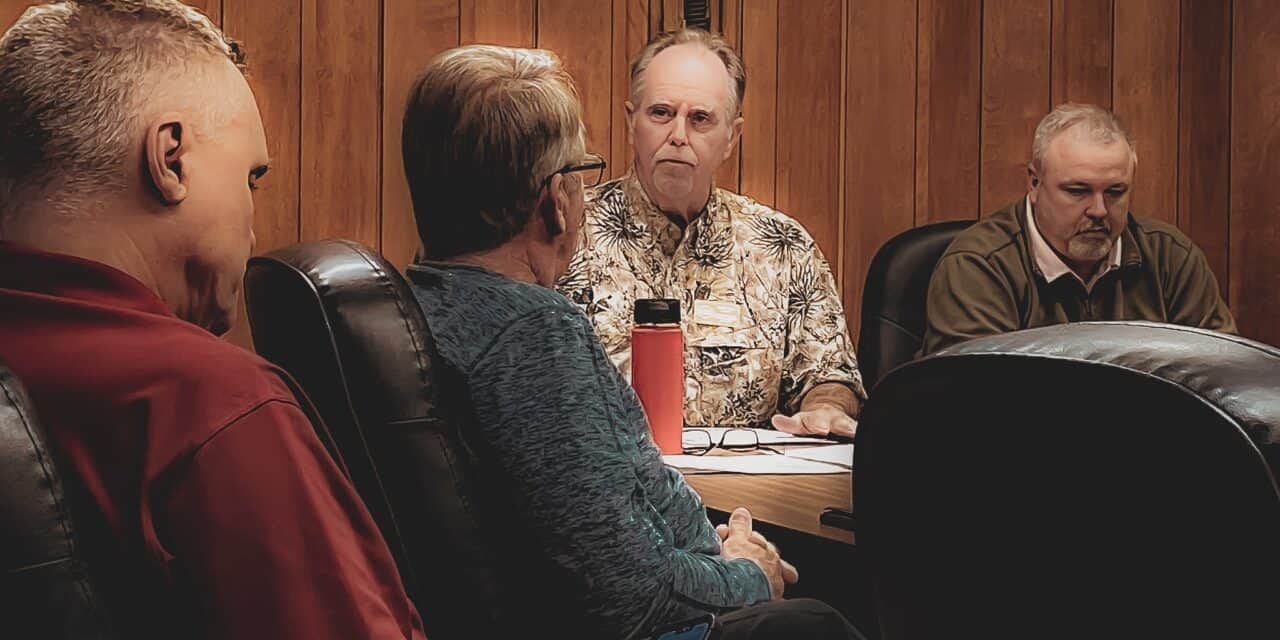 The Common Property, Forest, and Wildlife Committee met for the first time at their new meeting location, the Coronado Community Center, on November 7, 2022. Previously the committee was meeting at the Police Training Center facility located at 301 Balearic Road, but that building has been sold to Brandon Tedder of Renaissance Homes for $100,000.

Chairman Scott McCord said they have started preparation for the 2023/2024 Hot Springs Village Urban Deer Hunt. “Part of that preparation is to put together a plan to give to Todd [Noles] for review and approval and to present to [GM] Kelly Hale, as per his request. [Todd Noles is the Superintendent of Lakes, Dams, Common Property, & Forestry] That is a work in progress, and it is waiting on me, actually. Mark Quinton did his part, which was to write a brief on what the qualifications and the field day would look like.”

McCord continued, “I haven’t talked to Todd yet about the work we need to do as it relates to IP planning, website modifications/construction, whatever the case may be. The bottom line is that it is a work in progress. Stay tuned. We are working on it.”

Noles said, “We will get together later on that.”

McCord said that when the previous chair of the CPFW Committee, Max Billingsley, left to go to the Cooper Land Ad Hoc Committee, the logical backfill was for Tom Impellizzeri to take on the role of the CPFWC chair. As Impellizzeri did not wish to do this, McCord was approached by Secretary Anne Shears. McCord said, “I will do it on one condition. I will do it as long as I can do it to the level of satisfaction that is acceptable to me. I am not able to do that. I am going to resign from the position of Chair. We can assemble a group of people later to talk about how you want to backfill me.” McCord said he was willing to help as long as needed until the Chair position was filled.

Scott said his wife was right when she told him that “‘being a part of a committee is not a part-time job. That’s what I did in my career. You don’t join a committee and work one day a month.'” You have to work a lot.

McCord said that committees are a good thing for the Village. “If it weren’t for committees like this, a lot of work would have to be paid to be done because it is free labor. I am happy to be part of the process but not in a leadership role. I am not able to do the job in a level of satisfaction that is pleasing to me,” explained McCord.

McCord announced that CPFWC Vice Chair Tom Impellizzeri has resigned from the committee.

As of the date of the committee meeting, Noles reported that 202 deer have been taken in the 2022 Urban Deer Hunt, with 104 donated to Hunters Feeding the Hungry. “Last year at the same time, we were at around 320 deer taken. We are still ahead of the other Arkansas Urban Deer Hunts, but we are low for our standards,” said Noles.

There are 80 more hunters registered this year than last year.

McCord said, “there is a school of thought, right or wrong, that 380 people roaming around in the woods has really disrupted the activity of the deer.”

“The disturbance in the woods has a significant impact on their normal day-to-day activity,” continued McCord.

Committee Member Michael Beaver stated, “you are correct about that. I see that on my properties, but at the same time, when the season ends, they like to migrate back to wherever they herd at.” That would still put you roughly about 1,900 over the desired population.

Noles said that most of the hunters he has talked to haven’t seen many deer this year.

Board Member Bruce Caverly said that some hunters who signed up for the hunt do not participate.

Deer have a lifespan of around seven years because they lose their back teeth and cannot eat. They die of starvation. “That is why you want to take them as early as possible,” said Caverly.

Committee Member Max Billingsley said he does not think we are overgrazed because there are too many green briars out in the woods, and the deer also go to houses and feed on shrubbery and other plants.

Scott said that this year the deer have eaten the flowers on his boat dock for the first time.

Caverly added that the deer ate his plants.

Hale said that since we have 78 more hunters registered this year than last year, “the real question is, why are we 100 short with the harvest?”

“I usually have seven to eleven deer by my house, but recently have only had four to six,” stated Hale.

Caverly said it was 90-plus degrees a lot of days. It takes two hours to cut up the deer, and the meat goes bad in a short window.

Caverly said that we are a gated community but not fenced-in. The deer come and go.

Ken Unger, Director of Public Services asked if we have put out statistics to the hunters, letting them know our goals and that we are behind on the harvest. “We need a regular bulletin update because we are not having the Urban Deer Hunt for sport. We are trying to thin the herd,” explained Unger. Unger said this needs to be really emphasized next year.

Anne Shears said that the registration form for the HSV Urban Deer Hunt did not ask for email addresses, but it will next year.

Beaver said removing the outside hunters next year will mean there will be fewer deer harvested.

Noles said that only a “spotlight” deer count is conducted in HSV. Noles is trying to get ARDEQ to do a geothermal helicopter count because this is more accurate.

Noles reported that there has been a lot of poaching this year. Examples of this are turkeys killed with crossbows and people hunting out of the windows of their vehicles.

Hot Springs Village has received good support for the Urban Deer Hunt from the Arkansas Game and Fish Commission.

Because of the drought, mowing was behind schedule, but they should be finished with the yearly mowing within a few weeks.

Noles said his departments have started dredging Lake Cortez. The Common Property Department will assist the Lakes Department with this process.

Because of a pine beetle infestation, Noles is working on the first steps of timber thinning on Iniciador Way. Although thinning of this area will leave an unsightly hole in the woods, there is nothing else that can be done to alleviate this situation.

Shears reported no new common property permits were issued in the past month. She will be verifying that the work was completed on one previous permit.

Shears said that there may be an application submitted for annual maintenance for common property in the center of a cul de sac. Shears said, “we have a history of people taking those on in order to beautify them. They began putting wishing wells, benches, little fences, and other things.” Shears explained that is not permitted, but they can do plantings and grass cutting. The annual maintenance permit results in the Compliance Department monitoring the cul de sac to ensure the work is being done. One neighborhood representative takes responsibility. “The upcoming permit is for a cul de sac located in the Los Palmos subdivision, and it is kind of a de facto dog walking park,” stated Shears. She said she doesn’t believe there is a permit fee associated with this type of project.

Shears continued, “the reason we need to keep an eye on these projects is that after several years, the person responsible may stop maintaining the area.” There are a variety of reasons for this. If the permit holder abandons the maintenance, then Superintendent Noles should be informed so the POA mowers can take care of the area.

“If we gave this idea a little more publicity, it may be a way to reduce some of the POA mowings.”

Board Member Tucker Omohundro suggested we have an “Adopt a Cul De Sac” program.

Caverly said that only natural objects, such as boulders, can be placed on common property.

Unger talked about the new leaf and yard debris disposal options. The two new options were developed for cost-cutting purposes. Unger shared, “If it costs us, it is costing you. The goal is to make it as efficient as possible.” Click here to read the article regarding these new yard waste disposal options.

The POA will apply for two burn permits a year for the yard debris. It is not permissible to burn grass clippings. The grass will be composted and mixed with the silt removed from the lakes in the dredging process. This material will be used throughout the village for fill dirt. In the past, we paid vendors to haul off the lake silt, and then we would turn around and buy compost material.

Committee Member Max Billingsley asked if there was an update on the transfer of CCI property. The General Manager said there would be more information in a week. All of the properties had to be resurveyed, re-deeded, etc., and these processes take time to execute.

How was the purchase of the Cedar Creek property funded?

McCord inquired about the purchase of the Cedar Creek project and how it was funded.

Hale said the purchase of the Cedar Creek property was funded through the sale of the Police Training Center ($100,000) and also by other cost-saving measures implemented throughout the year.

Omohundro said that we are saving almost $1 million dollars a year on restaurant subsidies.

Things became a little tense at this point in the meeting when McCord asked the General Manager some questions about cost savings. McCord said, “Do you object to the questions?”

Hale joked, “No, I don’t object. I just like picking on people…”

Hale said that previously we had a bad plan for deferred maintenance. “We are going through [the old plan] and fixing it.”

McCord said, “I am glad to hear you say this.”

Shears said, “I just want to say that I’d like to thank Ken [Unger] for all of the highly visible improvements that we are seeing around here, especially the roads. I have heard complaints from people who are complaining about what hasn’t been finished, and I don’t understand it because so many miles have been completed, and it is a pleasure to drive down DeSoto [Boulevard] now.”

Hale said, “I am tired of hearing the ignorance that is out there. Make sure you quote me on all that. Because it is [ignorance].”

Unger said, “The one thing I will add is that the beauty of what we are doing is that most of the residents don’t even know it. We’ve rehabbed 43 culverts, greater than 36″ in diameter – some of them 60″ in diameter and never opened up [disturbed by digging into] a road.”

Omohundro said, “the GM wears his feelings on his shirtsleeve because he has been pounded so much…”

Caverly said that the GM has made himself so available to everyone, all committees, groups, you name it. “Everybody feels like they have a direct line to Kelly [Hale].

Caverly said, “He wants to be involved with the committees. And he wants to make sure that they are on the right track to help the Village go forward. I think that is where he is at with that, but I know he gets peppered, daily, from people with little ‘bitchy’ questions.”

McCord said, “Constructive input, I love. It is very welcome.”

At this point, McCord walked out of the meeting. McCord asked for the conversation to be on the record.

In lieu of a chair making the motion, Noles asked for an adjournment of the meeting.