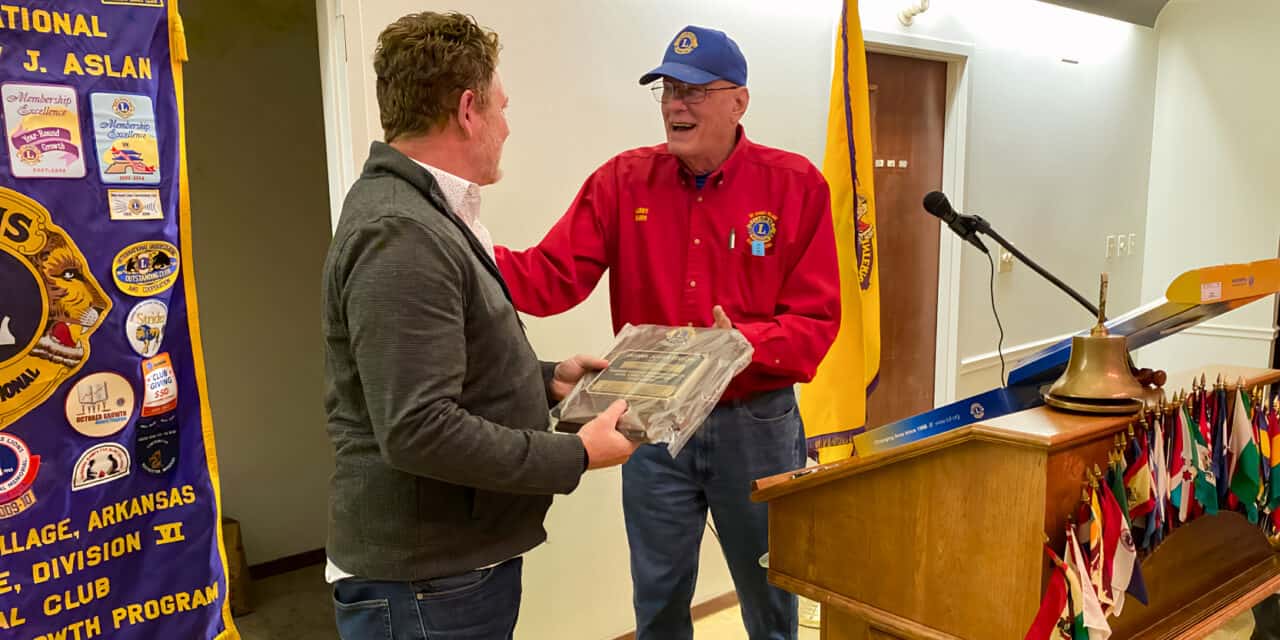 Hot Springs Village, POA Director of Parks and Recreation Terry Wiley was honored by the HSV Evening Lions on Thursday, November 17, at the club’s regular monthly meeting. The E-Lions met at The Turn Dining and Sports Bar at the Balboa Clubhouse facility, located at 111 Balboa Way, positioned on the edge of the beautiful Balboa Golf Course.

To begin the awards ceremony, Service Chairperson Nell Rocket was introduced by current E-Lions President Terry Sterzik. Rockett offered the group details about Lions Club founder Melvin Jones and the award named after him, the Melvin Jones Fellowship. Rockett said, “before I go into that, you need to know a little bit about Melvin Jones.”

“Melvin Jones was a dreamer, a doer, and a pragmatist. He was an energetic, extroverted salesman who, in private hours, would reread Shakespeare. What better man to found the world’s largest association of service clubs?”

“The Lions International Board of Directors officially designated Jones as the founder of Lions Clubs in 1958—more than four decades after Lions Clubs held its first meeting. But, no matter what his official title, Jones’ impact on the Lions has been far-reaching. He provided the leadership, the organizational ability, the tenacity, and the muscle necessary to establish the foundation for Lions Clubs International to become what it is today.”

The Melvin Jones Fellowship (MJF) is the backbone of the Lions Club. Rockett said, “if a club or organization donates $1,000 to the foundation [Lions Club International Foundation], they are eligible to receive the Mel Jones Fellows Award.” The recipient receives a special lapel pin and a plaque. Every year the HSV E-Lions presents at least one Mel Jones Fellowship Award.

Rockett said the HSV E-Lions have given “healthy contributions” to the foundation. “In our history, we are probably the largest contributor,” declared Rockett.

Awarding Wiley a plaque to recognize his service above and beyond both to the community and also in his unwavering support of the E-Lions Balboa Beach Park project was former E-Lions President Larry Bauer. Bauer declared, “some of you know, we’ve only given this award to two others who are not Lions. Bauer said Wiley worked closely with the E-Lions over the past year on the Balboa Beach Park Project. The E-Lion’s main focus is on service to the community and raising money for charitable organizations to help causes ranging from vision, to diabetes, and raising awareness of childhood cancer. The park project was outside of the Lions’ normal scope of activities. Bauer commented, “Wiley has helped to make the park a reality. He’s been in our corner and a supporter from the beginning of our work developing the Balboa Beach Park and Playground.”

Overwhelmed with emotion and gratitude, Wiley enthused, “It is a great honor to receive this recognition.  Hearing the backstory of Melvin Jones and his accomplishments, it is humbling to accept this award with his name on it.  It definitely makes me hungry to live up to these standards.  I am very appreciative of the Evening Lions for this and for all of the work they have put into our community.”

Terry’s wife, Carley, a Senior Human Resource Generalist at the HSVPOA, proudly watched while the honors were bestowed on her husband.

Lion Bauer stated that the HSV E-Lions raised close to $40,000, with about one-third coming from the pockets of club members and the remainder from generous community donators. “As we did this, we did not take away from any donations to the other regular activities that we support,” Bauer mentioned. 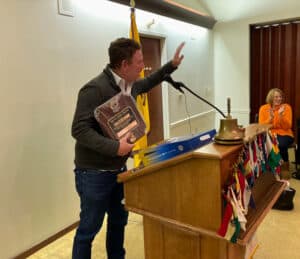 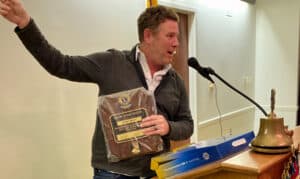 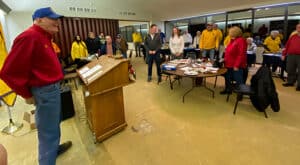