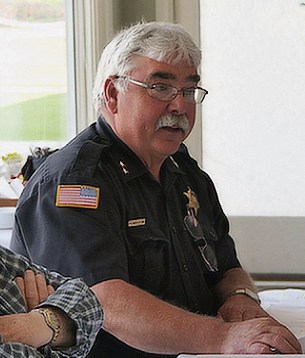 Chief Middleton said there are 21 certified police officers in the Village, including patrol, a lieutenant, administration, criminal investigations, and dispatch. They also dispatch for the Jessieville Police Department, which is a one-man department. Very seldom are there any calls for Jessieville. Middleton said he also has a clerical person and a part-time janitor.

In 2021 the department had 4,351 calls that were responded to. This number has been consistent over the years.

Chief Middleton said, “We are a full-service community police department.”

The police department has a budget of $2.5 Million.

This year’s plan is behavior modification in regards to speeding and passing.

Middleton will be working with the Compliance Department to assist them in slowing down some of the issues at the gates such as tailgating.

The department has asked for a computer system that will allow the officers to write their reports in their vehicles. While they are writing reports, they can be visible in high-traffic areas.

The Village continues to grow and Middleton would like to have a couple of more officers.

Biggest Obstacles – The Chief said his biggest obstacle is the same as everyone else – recruiting and maintaining good employees. He was fully staffed earlier in the year but is now short two officers.