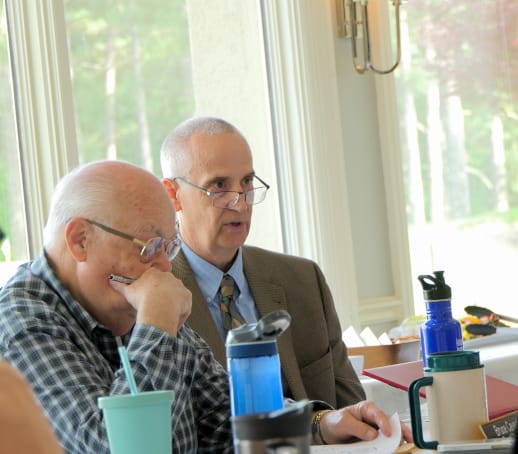 At the May 10, 2022 Board Retreat, Ken Unger, Hot Springs Village Property Owners’ Association Public Services Director said that after living in the Village for ten years, he had a real desire to help “steer the Village on the path of sustainability for future generations.” Unger also shared with the Board his philosophy for streamlining staff and operations, his ninety-day commitment, the challenges he faces as the HSV POA Public Services Director, and how he intends to begin to address these issues.

Unger intends to do “whatever is in his power and talent to fix infrastructure and meet the needs of the current members.”

On his first day on the job, Unger received a two-week notice of resignation from Brad Meredith, Lakes Manager. Unger immediately began researching who was on the Lakes team and what would happen if Brad’s position was not filled. He looked across the organization, it occurred to him that there was “potentially a synergy” and with only two weeks notice it would be difficult to ‘backfill’ Brad. In order for me to make that happen, it would have to be pretty quick. It made more sense after talking to my other superintendents, especially Todd Noles and Matt Broome. Matt is over roads and Todd is over forestry…maybe there was a synergy there, in sliding in some of that. After talking to everybody, it seemed like the right move. I also talked to Scott McCord [Chair of the Common Property, Forestry, and Wildlife Committee] just yesterday about possible synergies there. Is there synergy there to not backfill the [Lakes Manager] position and the answer, at least right now is ‘yes’.”

“What that does is, hopefully, streamline things.”

“My opportunity is to find changes in our organization that can be made that will solve problems that we don’t know exist today…by working as a team and figuring out what is the most effective way to approach [issues].

Unger said he did not take the job lightly. As Rolland [White] will tell you, “I started participating last year in Public Services Committee for the most part and the Finance and Planning Committee, on secondary. For the most part, I kept my mouth shut and my ears open.” Unger said he has been investigating the Village issues for a while.

Scott McCord talked to the Lakes Committee about whether it makes sense to combine forestry and lakes committees now so that we are more streamlined than ever.

Unger said he is committed to “doing wise things. We will spend every dime of that budget by the end of the year on wise things.”

Review of Operations and Maintenance Tables

“In order to solve a challenge, you need to document what it is,” explained Unger. “For the most part, the infrastructure of the Village has really depreciated.”

Unger has a plan to use slip lining for the culvers and deal with the bad ones on an urgent basis as the road actually fails. “The reality is, we’re trying to fix a broken arm on a patient who is suffocating.”

Smart Hydra Caps can be screwed onto the hydrants and when you open the water up, they can ‘see’ what’s happening between those segments of pipes. This technology will tell us if we have leaks.

Look at manholes during rain events to locate possible problems.