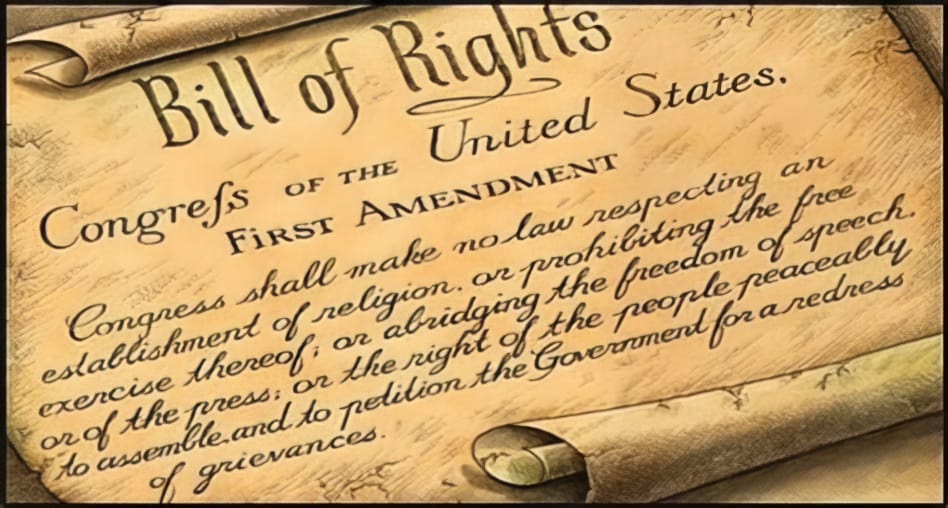 I think it is pretty safe to say that among the freedoms we cherish most, but perhaps also take for granted most, is our religious freedom. It was this freedom which was the primary impetus for most of those who ventured to the New World in the seventeenth and eighteenth centuries. Religious freedom came to be understood as one of humanity’s fundamental natural (unalienable) rights. Therefore, it is not conferred upon us by certain political groups or civil institutions. Rather, it is a pre-political inheritance from Almighty God and a basic tenet of Natural Law and as such has a prominent place among our nation’s organic laws where it has been preserved and protected. As our Declaration of Independence states, “That to secure these rights, Governments are instituted among Men, deriving their just powers from the consent of the governed.”

Today, when we think of religious freedom it is likely that the First Amendment is what most often comes to mind. That’s to be expected. What I want to share with you here is a crucial part of the history of the First Amendment. Spanning America’s early colonial days to the present, the concept of religious freedom has evolved from an environment of strictly enforced adherence to specific Christian sects (within individual colonies/states) to a broad pluralistic plethora of beliefs. Most of America’s Founders showed a preference for Christianity, primarily for its mitigating influence on the passions of men which was an essential for the success of self-government. Many of them also believed religion was a matter strictly between the individual and God (or no god). As Thomas Jefferson expressed it: “Almighty God hath created the mind free. All attempts to influence it by temporal punishments or burthens…are a departure from the plan of the holy Author of our religion…No man shall be compelled to frequent or support religious worship or ministry or shall otherwise suffer on account of his religious opinions or belief, but all men shall be free to profess and by argument to maintain, their opinions in matters of religion…”. The preservation of this freedom would eventually be codified in some form of law in the state constitutions.

A critical part of America’s journey of growth involved people and communities learning how to live out and preserve religious freedom through the social and civil institutions of self-government and how each could co-exist and be codependent and complimentary to the benefit of all people. This journey was a rough one at times, teetering between the concepts of religious freedom and toleration. From a historical standpoint, the concepts of religious toleration and religious liberty had different meanings, especially when it came to acknowledging the source and scope of the rights of conscience and religious expression. Toleration assumed freedom of religion as a gift of government that can be regulated at best and taken away at worst, not as a natural (unalienable) right of mankind. Toleration was also associated with an established church which was the norm for 8 of the 13 colonies, though all 13 had some form of state-supported religion.

To illustrate, the Maryland Toleration Act, also known as the Act Concerning Religion, was the first law in North America requiring religious tolerance for Christians. It was passed on April 21, 1649 by the Maryland Assembly. This Act is a good example of the paradoxical relationship in America between the establishment of religion and the free exercise of religion. This paradox, both the public establishment of religion and the individual right of conscience, were supported simultaneously at various times among the colonies. It became controversial only in the 1780s, when pressure grew for disestablishment of official state religions (which were various Christian sects). The resolution of this paradox took several forms, a major and pioneering one being the Virginia Statute for Religious Freedom.

Two hundred-thirty seven years ago this week, January 16, 1786, the Virginia Statute for Religious Freedom was enacted, culminating nearly ten years of deliberation, debate, and delays which had its origins in the spring of 1776 through George Mason’s authorship of the Virginia Declaration of Rights. This documentalso directlyinfluenced other foundational American documents that followed, including the Declaration of Independence, the U.S. Constitution and especially the Bill of Rights. Let’s take a quick look back.

The approval of the Declaration of Independence not only signaled political autonomy of the American colonies from the English crown, but also severed the colonies’ formal legal ties with the mother country. It was therefore necessary to bring the laws of the individual colonies into conformity with republican principles and to remove the existing legal code of any remaining vestiges of Monarchical rule.

Therefore, in the fall of 1776 a Committee of Revisors under the chairmanship of Thomas Jefferson was commissioned by the Virginia legislature to “revise, alter, amend, repeal, or introduce all or any of the said laws” of the Commonwealth. This became known as a Revisal of the Laws [of the State of Virginia]. The process officially began in January 1777. In Jefferson’s words, the Revisal was to structure “a system by which every fiber would be eradicated of ancient or future aristocracy…that our whole code must be reviewed, adapted to our republican form of government, and, now that we had no negatives of Councils, Governors, and Kings to restrain us from doing right, it should be corrected, in all it’s parts, with a single eye to reason, and the good of those for whose government it was framed.” Among Jefferson’s deepest concerns, and one of course he hoped the Revisal would remedy, was the issue of religious freedom. While George Mason’s Virginia Declaration of Rights included a guarantee of the free exercise of religion, Jefferson didn’t think it was thorough or explicit enough and among other changes included in the Revisals was a replacement of “all men shou’d enjoy the fullest Toleration in the Exercise of Religion” with “all men are equally entitled to the free exercise of religion.”

However, after 1779, work on the Revisal was slow and sporadic due to Jefferson’s election to the governorship of Virginia and subsequent appointment as the American Ambassador to France. After most of a decade and significant correspondence with Jefferson, on October 31, 1785 James Madison revived Jefferson’s vision of seeing the bills enacted into law. He guided them through the legislative process before the Virginia Assembly, presenting 118 bills contained in the Report of the Revisors.

The Bill For Establishing Religious Freedom (Bill 82) was one of those and also the first of five consecutive bills (82-86) addressing religion. The preamble reads in part, “Almighty God hath created the mind free” and willed “that free it shall remain.” Bill 82 essentially enacted four principles which represented a truly remarkable declaration of intellectual and spiritual independence: no person shall (1) be compelled by civil government to attend or support any religious worship, place, or ministry, nor (2) be punished or restrained by the Commonwealth on account of his/her religious opinions or beliefs; but, on the contrary, every person shall (3) be free to profess and contend for his religious opinions and beliefs, and (4) such activity shall in no way affect his/her civil capacities. This bill, in particular, was also strongly supported by religious dissenters (primarily Baptists, Presbyterians, Methodists and Quakers) who had suffered under the established church in Virginia and who desired religious freedom.

While only three of the five bills were enacted into law, they represented a church-state model which promoted an accommodation between the interests of the church and the state and prohibited governmental interference with the freedom of religious beliefs and expression. In all, these bills (if read in their entirety) would seem extreme and overreaching to many of us today, but understood within the context and circumstances of history were intended to serve as an effective corrective to the state-established church. The bills also shed more light on Jefferson’s actual views on religious freedom, which have contributed substantially to our nation’s unique balance between the claims of authority and the claims of freedom.

The bills also help to counter the modern Supreme Court’s interpretation that the First Amendment’s original intent was to erect a “high and impregnable” wall of separation between church and state per the landmark case of Everson vs. Board of Education (1947). The court’s decision was based in great part on its faulty use of two documents: Jefferson’s “separation” metaphor from a personal letter (1801); and the Virginia Statute of Religious Freedom. For the record, the First Amendment’s original intent was to delineate the constitutional jurisdictions of the national and state governments on religious concerns. In other words, the First Amendment prohibited religious establishments by the federal government only. The states remained free to either retain their established churches or abolish them. However, it wasn’t until well into the 19th century when the last of them was disestablished. (Massachusetts in 1833)

The Virginia Statute for Religious Freedom is one of the most influential and consequential documents in American History. It ended the Anglican Church’s formal establishment as Virginia’s state religion, and it was a precursor to future disestablishment legislation in other states, setting the course for the religious freedom principles that would become enshrined in many state constitutions as well as in the U.S. Constitution’s Bill of Rights.

George Washington, in a 1790 letter to a Hebrew congregation in Rhode Island,  noted that America chose a different path in regard to toleration versus freedom: “The Citizens of the United States have a right to applaud themselves for having given to mankind examples of an enlarged and liberal policy: a policy worthy of imitation….It is now no more that toleration is spoken of, as if it was by the indulgence of one class of people, that another enjoyed – the exercise of their natural rights. For happily the Government of the United States, which gives to bigotry no sanction, to persecution no assistance, requires only that they who live under its protection should demean themselves as good citizens.”

For 30 years, Since 1993, Religious Freedom Day has been officially proclaimed on January 16in an annual statement by the President of the United States. In one of those statements,  one of our former presidents reminds us: “On Religious Freedom Day, we celebrate our Nation’s long-standing commitment to freedom of conscience and the freedom to profess one’s own faith. The right to religious freedom is innate to the dignity of every human person and is foundational to the pursuit of truth.”

I hope these thoughts will both inform and enrich your observation of Religious Freedom Day this Monday, January 16.