The Seeds of a Great Nation 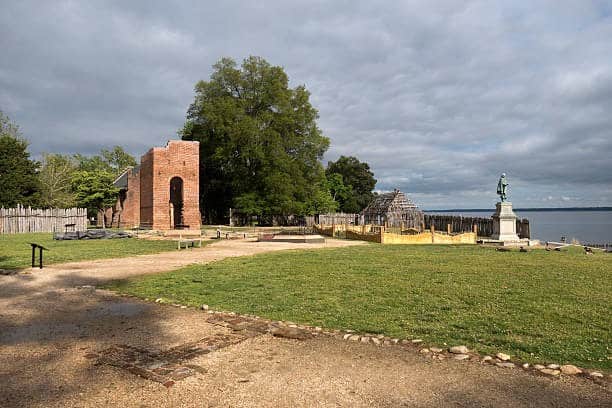 Reflections from History and Faith: The Seeds of a Great Nation

In December 1606, three small ships sailed from England. On board the Susan Constant, Godspeed and Discovery were 104 colonists full of hopes and dreams of a new world where they could make a new life of freedom, family, and prosperity. After more than 4 months at sea, they marveled at the “faire meddowes and goodly tall trees” along the Virginia coast. Four hundred fifteen years ago, on April 26, 1607, they sailed into the Chesapeake Bay in what is now Virginia.

After coming ashore, they erected a wooden cross and gave thanks to God for their passage across the Atlantic. In the days that followed they explored inland along a wide river, they named the James, in honor of their king. In May they established the colony of Jamestown, sixty miles from the bay’s mouth. Originally known as “James Cittie,” it was the site of the first English settlement in America.

From the Charter of 1606, we can see from the very beginning something of the initial identity of our nation. “…We, greatly commending, and graciously accepting of, their Desires for the furtherance of so noble a Work which may, by the Providence of Almighty God, hereafter tend to the Glory of his Divine Majesty, in propagating of Christian Religion to such People, as yet live in Darkness and miserable Ignorance of the true Knowledge and Worship of God…..”

One of the first acts of the settlers was to kneel down and commemorate the Last Supper together. Their chaplain, the Reverend Robert Hunt, presided and he became the first minister of the colony. Today, a bronze memorial to Robert Hunt stands on this site and includes the colonist’s own testimony which reads in part, “We all received from him the Holy Communion together, as a pledge of reconciliation, for we all loved him for his exceeding goodness. He planted the First Protestant Church in America and laid down his life in the foundation of America.”

The church tower is all that remains of the original 17th-century structure. It was due primarily to the Charters of 1609 and 1612, largely written by Sir Edwin Sandys that allowed the seeds of the Christian common law from England to sprout in Jamestown, transferring control from the king to a company-appointed governor.

Through Sandy’s’ continued guidance and the Ordinance of 1618, Jamestown’s journey toward self-government led to America’s first representative legislative assembly, called the House of Burgesses. From July 30 to August 4, 1619, the House met “to establish one equal and uniform government of the people there inhabiting…..But forasmuch as men’s affares doe little prosper where God’s service is neglected, all the Burgesses took their places in the Quire till prayer was said by Mr. Bucke the Minister, that it would please God to guide and sanctify all our proceedings, to His own glory and the good of this plantation.” Thus, Jamestown provided the initial blueprint for the American government and our foundation of being a nation of laws and not of men.

Early on, Jamestown was almost abandoned. The choice of a swampy site location, impure water, meager diets, illnesses and diseases, and sharp contrasts of climate resulted in about two-thirds of the settlers dying within a short time. Fortunately, the colony received additional settlers and supplies in 1610 and it survived, due in great part to the strong leadership of John Smith and Governor Thomas West. Four hundred years ago this March, in 1622, the Algonquians attacked the plantations, killing over 300 of the settlers, though a last-minute warning spared a total loss of Jamestown.

In 1624, Virginia became a Crown colony administered by a Governor appointed by the king. In 1676 and again in 1698, a fire destroyed the Jamestown settlement which served as the capital of Virginia until 1699 when it was moved to Williamsburg. Afterward, the town of Jamestown fell into decay but today it is restored as a monument to those whose faith, principles, perseverance, sacrifice, and courage planted the seeds of the Christian common law, self-governance, ordered liberty, and ultimately a great nation – the United States of America.