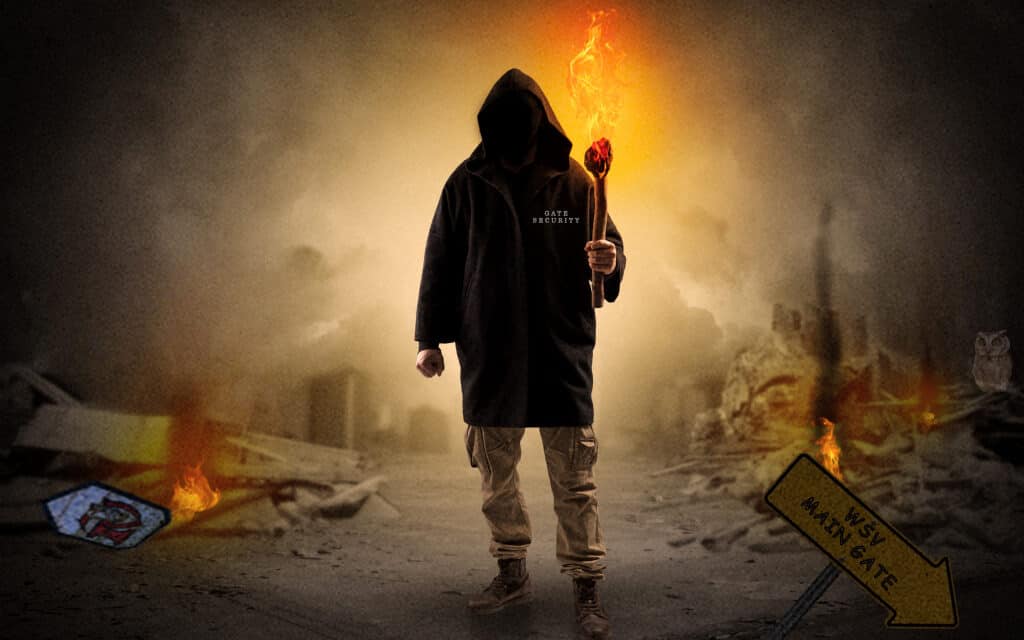 Sixteen thousand people, more or less, had settled in Warm Springs Village in the hopes that their golden years would be spent in peace, though not always quiet. There was so much to do in the village, with its lakes, golf courses, and at least a hundred special interest clubs, that nobody had to be bored or lonely, ever.

Earthquakes had not been mentioned a single time in the promotional brochures for the lovely gated village. That’s not exactly an attractive selling point, so it just never came up in the conversation between the busy real estate agents that worked so hard bringing folks into this beautiful haven.

Well, it certainly was a topic of conversation now, all over the village.

One of the structures that had been damaged in the shaking and rumbling was the guard shack at the west gate of the village. A long crack in the ground had appeared just outside the front wall of the building, and the entire façade had fallen off, settling into a newly-formed pothole. The bulk of the wall, itself, had tumbled inward, barely missing the terrified young man who had been on duty. His reaction to this sudden turn of events had been to abandon his post, forthwith. Anyone could now enter the village or leave it, unhindered and unnoticed.

Warm Springs Village Police Department had quickly reached its capacity to keep any semblance of order and security. Uniformed civil servants who had been used to “protecting and serving” were now scurrying like ants in a melted puddle of ice cream.

Jezebel had been the one to notice the water that had formed an advancing stream in the hallway outside her jail cell and had called Marla Jo’s attention to it loudly.

“I have civil rights, you know!” Jezebel informed her. “You can’t leave me here to stew in a river of filth coming from the bathroom!”

Marla Jo’s poor, fevered brain was already in overdrive and beginning to show signs of heavy wear and tear as she quickly unlocked Jezebel’s cell door and said, “Follow me to a dry room.”

Well, following Marla Jo was not in Jezebel’s plan, so the very second she stepped outside the cell, she sprinted right past the female cop and bolted through the office, bursting through the outer door and racing across the parking lot. She disappeared into the woods before Marla Jo could assimilate what had just transpired.

Then, contrary to her years of training and experience, Marla Jo’s body and brain conspired together to issue a decision: There would be no foot chase right now. Nope. Tolerance limit surpassed. Let the little brat run. Let the earthquake or the chaos take care of Ms. Jezebel.

Inside the operating room at the local hospital, the nurse-anesthetist nervously mumbled, “Wait for it…wait for it…” and in fifteen seconds, the battery-powered lithium lights came on, illuminating the space with a noticeably dimmer glow, but enough to allow the doctor and nurses to finish their work on Lance Strong. He would survive two catastrophes in one night – a motorcycle-vs-deer collision and the first earthquake ever known to have hit Warm Springs Village.

News vans and sightseers now traversed the main road into Warm Springs Village freely. On the radio and television, the consensus was that the village had taken the brunt of this quake, and most likely, this would not turn out to be the New Madrid Fault coming to rip Arkansas in half.

Headlights, news videographers’ lights, and whatever battery-powered lights were available, were the only things illuminating the village besides some old, leftover Christmas candles that a few folks were gathered around in their homes.

A few adventurous folks were outside, inspecting the new crevices and cracks in the streets and yards. Some trees were down, and several older homes had sustained damage to the windows, carports, and driveways, but overall the damage to property wasn’t devastating.

The couple of dozen cars that were making their way to the hospital were carrying mostly senior citizens who had suffered an increase in heart rate and blood pressure from the terrifying shaking and rumbling, and one unfortunate man who had been on a ladder in his basement, changing a lightbulb, when the temblor had thrown him one way and his ladder another way.

Missy and Norman had been watching the news on tv and sipping on tea with lemon and honey. Occasionally, the conversation would shift from the earthquake to Norman’s brother, Ruston, who had chosen this night, of all times, to run away.

“I don’t know whether to worry about his safety or be so ticked off at him that I want to smack him one,” said Missy. “This was seriously all we needed to have added to our “stress sandwich” that we have been feasting on around here.”

Norman agreed. “His decision-making skills are one of the things that likely contributed to Mama’s death,” he said. “Of course, I wasn’t much help, either, running off and leaving her there to deal with him.”

“Yeah, and the both of you have brought me one truckload of trouble after another, you know,” Missy said, with just a hint of a grin to show that she wasn’t angry.

Just then, there came a loud, rapid knocking on the front door. Missy and Norman both took a little gasp and looked at each other with wide eyes.

“Maybe it is the police or some emergency worker checking on us,” Norman reasoned.

“That would be the best possible scenario,” Missy said, “but it wouldn’t fit in with the kind of luck we have had lately.”

“I’ll see who it is,” Norman said, with some trepidation in his voice.

By the time she made her way back with her pistol, the pounding was getting louder and faster, and Missy’s nerves had just about had all they could take. Temper was moving to the forefront…

“I am about to open the door!” she yelled as she approached the entryway. “I am not alone, and I am armed!”

“Me, too!” yelled Norman, raising the baseball bat he had snatched from his bedroom.

Just then, the first wave of repaired underground lines had been finished by the power company linemen who were toiling tirelessly at time-and-a-half pay. The lights on both sides of Missy’s street came on, bright and certainly welcome.

Startled by this sudden development, Jezebel Jones panicked, turned, and jumped off Missy’s porch, clearing the rose bushes and tearing across the yard.

Missy and Norman hurried to the front window and slung the curtain back just in time to see that familiar little troublemaker beating a hasty retreat across the grass. When Jezebel reached the street, she was at her top speed and had no idea that less than two blocks away, she would spot a young man walking in her direction – the tired and frustrated Ruston Wrigley.

STAY TUNED FOR MORE TO COME…

CLICK HERE FOR THE LINKS FOR ALL PREVIOUS CHAPTERS OF A VILLAGE TALE.