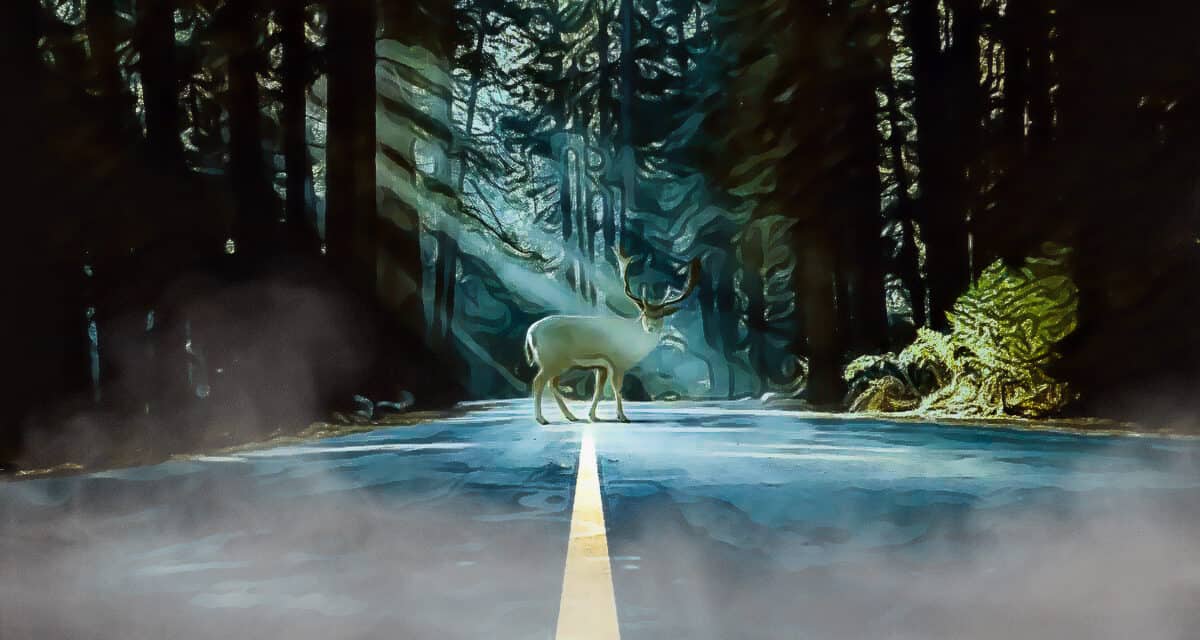 Lance’s motorcycle wasn’t used to the slower pace of thirty-five miles per hour, but the determined rider kept the speed down, so as not to attract any unwanted attention. The night air had a distinct nip in it and the anticipation of the pending rescue of Jezebel Jones, Lance’s dream woman, had his adrenaline pumping. He tried to formulate some sort of plan of action for springing the damsel in distress behind bars, but he couldn’t concentrate. He could barely focus on the road ahead of him. In Warm Springs Village, that is a big, big mistake.

The cozy village didn’t have any “cryptids” or any such monsters, but it was heavily, and I mean heavily populated with critters. Reports of black bears, coyotes, foxes, raccoons, snakes, and other creatures were beyond common. But the most hazardous animal, by far, to dwell in Warm Springs Village was the White-tailed Deer. They were everywhere, and seemingly more numerous than mosquitoes.

Despite it being against Village regulations to feed Bambi’s relatives, people still did, because deer are cute. Well, they are beautiful, actually. Who doesn’t love deer?

Nearly every edition of the Warm Springs Village Gazette that came out contained another story of the unfortunate meeting between some senior citizen’s automobile and another four-legged White-tail, with or without antlers. It never ended well for one or both parties.

Always the same scenario, the deer would just “suddenly appear from out of nowhere” and would end up making a mess of itself and someone’s fender, or worse, their windshield. Many times there would be another half dozen or so deer traveling with the one that didn’t get to walk away from the incident. They are social animals.

The last thing on Lance’s mind that night was White-tailed deer. And, when I say “the last thing” on his mind…would it turn out to be, literally, the very last thing he ever thought?

Lance had just made the turn onto the last block, the home stretch, heading to the jailhouse. His heart was pounding. He reached back with one hand to check that his pistol was still securely in place in the back of his belt. This only left one hand on the handlebar.

Odocoileus virginianus struck. Quick as lightning, and trailing two does and three fawns behind him, there he was in all his twelve-point glory, wrapping the motorcycle and its rider around himself and leaving a huge gruesome pool of blood, gasoline, fur, antlers, hooves, and human being sprawled on the roadside and into the ravine. The does and fawns scattered in panic and confusion.

Lance lost consciousness for a minute or two. Then he became aware of pain over most of his body, and a strange smell. It was gasoline, and he knew he had better get out of it. With gargantuan effort, he dragged himself away from the bloody heap that had been his motorcycle and the largest deer he had ever seen.

The night air helped clear his head in a few minutes. He tried to stand but his legs were having none of it. He knew he needed help. His cell phone had been knocked clear of the wreckage and he couldn’t see it anywhere around.

He could think of one way to summon help without a phone. He slid the handgun out of the back of his belt and fired it three times into the air. If that didn’t get any attention from the police station less than a block away, then this little village needed better cops.

Sure enough, John Kelly was sitting in the break room at the cop shop and heard the three shots ring out. He was in his cruiser and headed toward the source of the sound within a minute. His headlights picked up the mangled mess of metal and antlers, and a few yards from that, the badly injured figure of Lance Strong.

He knew right away that this was the man he had spoken to at the inn earlier, and that this heap of scrap metal was what was left of the “two-wheeled Cadillac” that the man had possessed.

Officer Kelly parked and jumped out, but used his car door as a shield in case the shots he had heard shortly ago weren’t going to be the only ones fired.

“Did you fire your handgun a few minutes ago, sir?” he yelled.

With his strength fading fast, Lance moaned, “Yes, sir. Just to get some help.”

Lance sent the pistol skittering across the pavement as far as his aching arm would allow. The police officer picked it up and put it in the glove compartment of the police car. Then he radioed for EMTs to hurry to the scene.

Using his flashlight, he gave Lance a once-over and didn’t see anything that would spell rapidly-impending death. “I will have an ambulance here in just a minute,” he said. “Can you breathe okay?”

“Depends on what you mean by ‘okay’” Lance responded. “My chest hurts. Everything hurts.”

“Help will be here very soon, I promise,” said John. “You came across the deadliest creature in the village. You are lucky to be alive. Bambi vs. motorcycle is a disastrous match-up.”

Just then, the ambulance arrived and the emergency team examined Lance and loaded him onto the gurney. “Want to meet us at the hospital, Officer Kelly?” asked Big Bill, the EMT supervisor.

“Yep. I’ll follow you. I don’t think this guy will be dangerous to you guys. He has had all the energy taken out of him tonight.” So Officer Kelly radioed for someone to come and investigate the scene while he went to the hospital. It didn’t take long for another officer to show up and start photographing, measuring, and analyzing the scene.

Inside the jailhouse, Jezebel Jones snoozed on, blissfully unaware that someone had just nearly lost his life trying to get to her.

At Missy’s house, there was a lamp shining on the bedside table and Missy was in the bathroom again, trying further to recover from the hairspray to the eyes earlier. She was still angry but exhausted.

Norman was tossing and turning, dreaming of the tortuous nights and days he had spent living in the woods of Warm Springs Village before he had met Missy.

Ruston was sitting in the corner of the room, leaning against the wall. He rocked back and forth and gnawed at his fingernails, which were already bitten down to the quick. There was a battle going on inside his angst-ridden mind. Part of him kept repeating “Worthless! Worthless!” to his mind’s ear. The other part of him struggled to rise up and become a hero, demonstrating to Missy, to Norman, and to the whole world, that he could and would do the right thing – whatever that turned out to be. He really needed to be a hero, for once in his life.

Stay Tuned For More To Come…

Click here for the links for all previous chapters of A Village Tale.