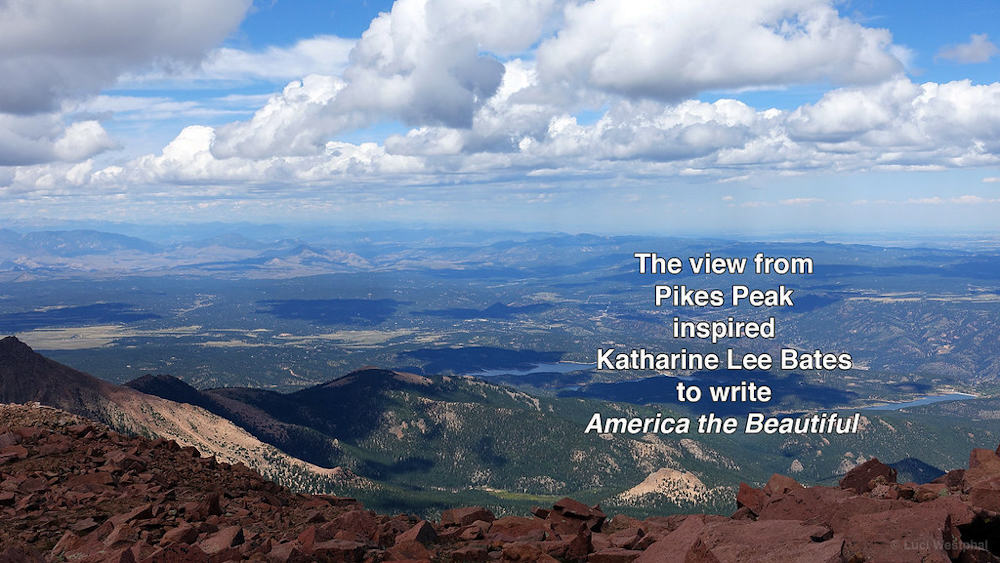 Music has been an important part of my life ever since I began playing piano and trumpet (cornet) in grade school. Back then of course I couldn’t anticipate or foresee how music would open up a world to me that otherwise would have turned out to be much smaller and less beautiful. Having since played many songs of patriotism and hymns of worship, I’ve never grown tired of them and I continue to enjoy their message and inspiration – year in and year out.

The birth of one of my favorites of the hymns occurred 129 years ago this week. Its author (1859-1929) was born and grew up in Falmouth, Massachusetts. She became a noted scholar, speaker, and prolific author publishing many volumes of poetry and books on her travels to Europe and the Middle East and stories, verses, and plays for children. She also published several books on Shakespeare and pre-Shakespearean English Religious drama.

Though I haven’t read much of what she wrote, I believe it safe to say that little if any of her poetry or other writings can compare in beauty and certainly not in scope and influence to “America The Beautiful.” By 1893 she was a young professor of English literature from Wellesley College in Massachusetts. That summer she traveled to Colorado Springs to spend a few weeks teaching a summer session at Colorado College. On July 22nd, she and other visiting teachers all loaded onto a wagon for a rough ride up to the top of Pikes Peak (the “supreme day of our Colorado sojourn” as she later expressed it). As she told it, “We strangers celebrated the close of the session by a merry expedition to the top of Pike’s Peak, making the ascent by the only method then available for people not vigorous enough to achieve the climb on foot nor adventurous enough for burro-riding. Prairie wagons, their tail-boards emblazoned with the traditional slogan, “Pike’s Peak or Bust,” were pulled by horses up to the halfway house, where the horses were relieved by mules. We were hoping for half an hour on the summit, but two of our party became so faint in the rarified air that we were bundled into the wagons again and started on our downward plunge so speedily that our sojourn on the peak remains in memory hardly more than one ecstatic gaze. It was then and there, as I was looking out over the sea-like expanse of fertile country spreading away so far under those ample skies, that the opening lines of the hymn floated into my mind.” From the snow-capped summit “I gazed in wordless rapture over the far expanse of mountain ranges and the sea-like sweep of plain” before her. That evening, back in her room, Katherine Lee Bates scribbled out the beginnings of a poem inspired by the spectacular view atop the mountain.

Later that same year, Miss Bates traveled to other parts of America, including the World’s Fair in Chicago. There, the magnificent architecture on display inspired her to include the expression “Alabaster Cities” in the last stanza of her poem. As she stated, “It was my desire to compare the unusual beauties of God’s nature with the distinctive spectacles created by man.” Over the next 20 years, she would make other additions and revisions to the poem. On July 4, 1895, her poem (then titled America) was published in The Congregationalist, a popular church magazine. In her words, The hymn attracted an unexpected amount of attention. It was almost at once set to music by composer Silas G. Pratt. Other tunes were written for the words and so many requests came to me, with still increasing frequency, that in 1904 I rewrote it, trying to make the phraseology more simple and direct.” On November 19 of that year, the poem was published in  The Boston Evening Transcript. Final additions to the poem were subsequently made and it was again published in 1913.

Favorable responses from readers of both publications helped to spur continued interest in having the poem set to music. For several years, it was sung to almost any popular air or folk tune with which the lyrics fit. “Auld Lang Syne” was one of the most common. Among the dozens of tunes composed and tried with the poem’s text included one written by Samuel Augustus Ward (1847-1903), a Newark, New Jersey church organist, choirmaster, and composer. Ward originally composed the melody (also titled “Materna”) to accompany the words of the sixteenth-century hymn “O Mother Dear, Jerusalem.” The melody was first published with Bates’ poem in 1910 as America the Beautiful. In 1926, the National Federation of Music Clubs sponsored a contest to discover new music for Bates’ poem. Finding a winner ultimately failed, so Ward’s music prevailed and continues to.

Bates’ love for and devotion to her country was/is also seen by the hundreds, perhaps thousands, of free permissions for “America the Beautiful” to appear in church hymnals and Sunday School song books of nearly all the denominations; in a large number of regularly published song books, poetry readers, civic readers, patriotic readers; in manuals of hymns and prayers, and anthologies of patriotic prose and poetry; and in countless periodicals.

While Bates was initially surprised by the poem’s success, she later reflected that its enduring “hold as it has upon our people, is clearly due to the fact that Americans are at heart idealists, with a fundamental faith in human brotherhood.” “America the Beautiful” has been called “an expression of patriotism at its finest.” It conveys an attitude of appreciation and gratitude for the nation’s extraordinary physical beauty and abundance. However, that is not the end of it nor even the core of its message. Each stanza of this hymn combines appreciation of America’s beauty with prayers to God for His blessings on and aid for the nation. Each stanza is also rounded off with the earnest prayer that God will always help our land to attain her ultimate destiny. In Bates’ words, “We must match the greatness of our country with the goodness of personal, Godly living. If only we could couple the daring of the pilgrims with the moral teachings of our Lord, we would have something in this country that no one could take from us.”

Today the song remains one of America’s favorite patriotic hymns as it describes the majesty and vastness of our beautiful land, expresses our nation’s noble and Godly heritage, and reminds US that the greatness and future of America is still dependent upon our repentance and God’s mercy and blessing – that He may continue to “shed His grace on thee.”