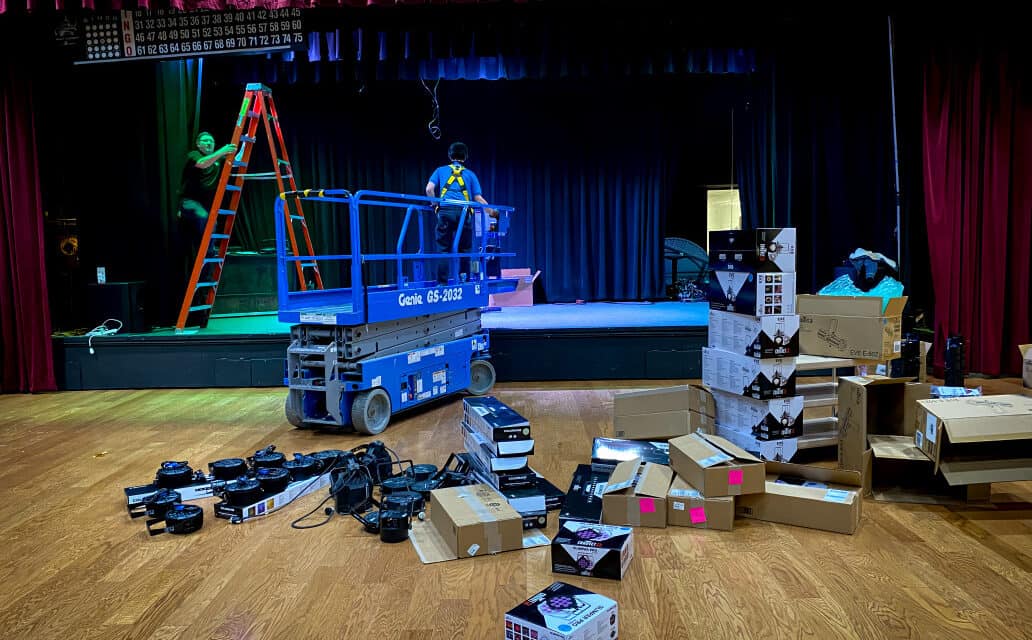 The Hot Springs Village Property Owners’ Association is upscaling the lighting system at the Coronado Community Center (CCC) to be of the same caliber as that in the Woodlands. Dakota Estes, Audio/Visual Supervisor for the HSVPOA, and Corey Baldwin, Audio/Visual Technician, were hard at work on the installation of the upgrade on Monday, November 7, 2022, when the removal of the old lighting system was also achieved. This improved lighting complements the newly installed speaker system and will help to provide a better entertainment/meeting venue for the community.

The new lighting has “an assortment of LED stage lighting fixtures, from pars to wash lights to ellipsoidals.  The new fixtures are more professional than what has been there all this time, with more color options and features.  The old lighting was weaker and less bright, and the colors were not as vivid,” explained the Audio/Visual Manager.

Estes said that as of November 10, “Installation of lights on the stage is complete, but we are now working on relocating the “front of house” rail.  We will not install the remaining lights on that rail until the relocation is complete.  Relocation [of the rail] is expected to be finished a couple of days before Thanksgiving.  Once that is done, it will take us but a day to hang and program the rest of the lights.”

“The reason we are extending the front of house rail away from the stage is because of how close it is, which is 3.5 feet away.  With the way it is hung now, none of the light beams are given the chance to spread out as they should, which means everything is spotty and concentrated.  The angle the lights shine is too top heavy as well, when it should be more from the front.  Extending the rail away from the stage will give the light beams the range they require to be used properly.  Light beams are conical, with the beam spreading wider as it extends further from the fixture.  If you look at the front of house lighting rail at Woodlands, you’ll see it is many feet away from the stage, as it should be.

“This [project] is a joint effort between the Parks & Recreation and Public Services Departments, as the relocation of the front of house lighting rail requires electrical and structural work to extend the rail further into the auditorium,” shared Estes. The Audio/Visual Department is a part of Parks & Recrecreation.

Replacing a 20-plus-year outdated system, the new LED lighting will be more energy efficient, resulting in lower energy costs. In Estes own words:

“This system is better because we are completely LED now; we were able to get rid of all incandescent fixtures.  LED is more versatile, you can do more with them as far as special effects, colors, strobes, etc.  Now, one LED fixture can handle all the colors of the rainbow, whereas with incandescent fixtures you manually have to attach a color gel sheet (only one at a time, so pick wisely!) to the front of its housing to achieve a color. Not only is LED better for color versatility but it also consumes less power and does not put off the same kind of heat as incandescent.  In turn, we now save money on energy usage.

“Another note to mention is that the ellipsoidals we bought for the front of house rail have what are called shutters.  These allow us to “trim” off any excess lighting from the top, bottom, left, and right of the beam to tighten a certain fixture into a stationary spotlight of sorts.  This is similar to the instruments used at Woodlands Auditorium, along with many other professional theaters.

“A fun new aspect of some of the new instruments is that they can put out ultraviolet light, which will really give life to any clothing with whites and bright colors.  We did not have this ability before, and it has been requested by performers in the past.

“A new computer interface was purchased to grant us even further lighting capabilities.  This interface allows any computer with necessary software to act as the lighting controller.  The old light console could control up to 40 instruments, the new interface can handle 1,024.  Because of this, it means any new fixtures we may gain over the course of time can be added with ease.

“Finally, we purchased a new LED spotlight for the control booth to replace the old broken incandescent one.  The old one used to get very warm because its internal fan broke and could not dissipate heat fast enough—it recently died for good, so we were forced to replace it with something newer.”

The new lighting was financed with $2,800 in donations, in addition to POA funds.

Ultimately, all of these upgrades and improvements will make the Coronado Community Center’s performances look professional and will give the ability to put on exciting light shows!