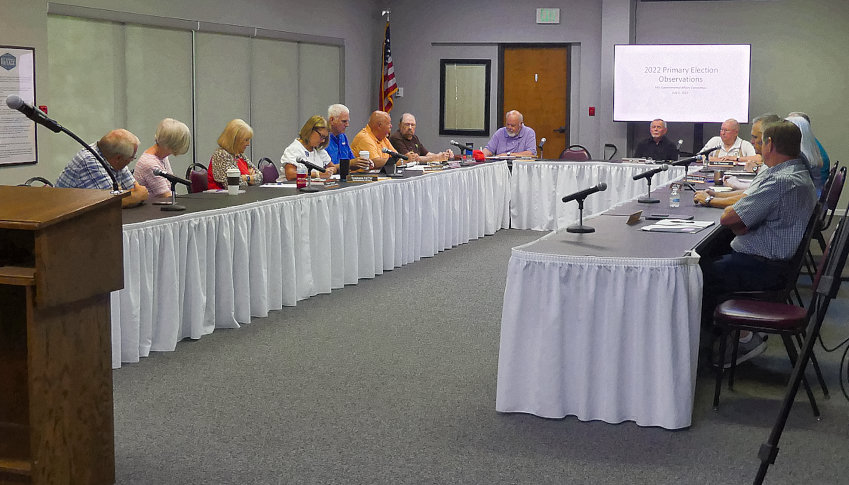 The HSVPOA Governmental Affairs Committee (GAC) met on Friday, July 1, 2022, at 9:00 AM at the Ouachita Room at the Ponce de Leon Center. There were two special presentations – The History of the GAC and JP Keith Keck’s 2022 Primary Election Analysis.

Change to the agenda – Melissa Speers was unable to attend the meeting.

Click here to read GM Kelly Hale’s Clarification on the role of committees.

Pettey said, “There are a lot of pigeon holes we don’t fit in. What we are looking to do is build our own pigeon hole and export that pigeon hole in broadband, in water, and whatever other area we can. That is the goal.”

Bob Pettey said two members recently resigned. David Childs was the only person still left on the GAC when Pettey came onboard. Childs said, “It is important that organizations constantly look for opportunities to evolve, grow, and improve. Now is the perfect time for GAC to add as much new talent and new ideas as possible and I can contribute to that improvement by stepping aside and making additional room.”

Pettey said, “Steve Rittenmeyer resigned last week after the U.S. Supreme Court came down with its decision on the abortion case. Steve is a Democrat and he feels he needs to get back into more partisan politics and felt it could present a potential for conflict of interest. As you know, in the Charter for the committee, we are to work on a nonpartisan basis. To avoid even the appearance of impropriety, Steven has stepped aside.”

That leaves the committee with one vacancy because they have already filled one of the vacant seats with Debra Cox, pending Board approval. Pettey suggest they leave the vacant seat open for now while they are going through the process of checking out the Garland County beat, Saline County beat, the Little Rock beat and the Healthcare beat to see if there is a niche that needs to be filled.

There are only a few paper copies left of the Economic Impact Report. Click here to read the report online. Pam Avila is working on ‘one-pagers’. There are five different ‘one-pager’ versions coming, meant to target specific groups. One is for economic development, another targets new residents. There are also versions for political and elected officials, and one for the healthcare industry. The ‘one-pagers’ will have a QR code that can be scanned to pull up the entire document.

JP Keith Keck said the Saline County and Garland County Libraries are talking about consolidation – going to a regional library. They want to make sure the Village is part of the discussion.

The striping needs to be finished. By mid July, ARDOT hopes the asphalt will be done. They hope to have the road completed by fall.